On Saturday evening, Oct. 12, a crew of 20 volunteers from Urbana (IL) High School arrived at the Habitat dorm, and I was very happy to see them. There is a long history here—I actually graduated from this high school 51 years ago—but that’s a peripheral feature of the narrative. The group was led by UHS teachers Mark Foley and Laura Koritz (ably assisted by Taryn Smith and Sara Jones), and Mark and Laura are the real story.

Mark first experienced Habitat in the Delta in 1995, as a college student at the University of Illinois, coming south to help transform the old Sherard Methodist Church building into a Habitat dorm. His initial exposure to the work wasn’t especially positive; within 24 hours of his arrival, he was struck by a virulent strain of stomach flu, which laid him low for a couple of days and gradually spread to the majority of the work team throughout the week—but that’s a different story. When he recovered, he became part of the team that drywalled the 20-foot high ceilings in the dorm, and, in the mornings, he led the group in a rudimentary form of collective worship for devotions. Despite the illnesses (or maybe because of it), the crew (including Jane, me, and our three young boys) experienced the presence of God and a strong sense of bonding in such a powerful way that we continued to meet together for six and a half years after our return to IL and returned to the Delta every Spring with new initiates.

Laura’s initiation into the Delta Habitat world came a few years later, in 1998. She was a member of the second group of Uni students to come south, working with the Farrell-Sherard affiliate and experiencing the magic of Dorothy Jenkins and her cohort of beautiful Habitat homeowners. It was Dorothy who first introduced us to the Delta Habitat mantra, “Y’all are just family we didn’t know we had,” and Laura got a compelling introduction to that reality during that memorable week.

Years later, as fellow teachers at Urbana High School, Mark and Laura discovered that they had this hitherto unknown common bond with Habitat work in the Delta. They also determined to make possible for their students what had been made possible for them as young people, and so, in 2013, they began bringing Urbana students to the Delta. For the first ? years, they brought their kids in February to work with Habitat in nearby Tutwiler, but, this year, thanks in part to Laura’s and Mark’s successes as teachers (both have received prestigious Teacher of the Year Awards, with Mark’s being the Gilder Lehrman Institute’s Illinois State History Teacher of the Year for 2018), they were given permission to create two trips—hence their arrival in Clarksdale on Oct. 12. 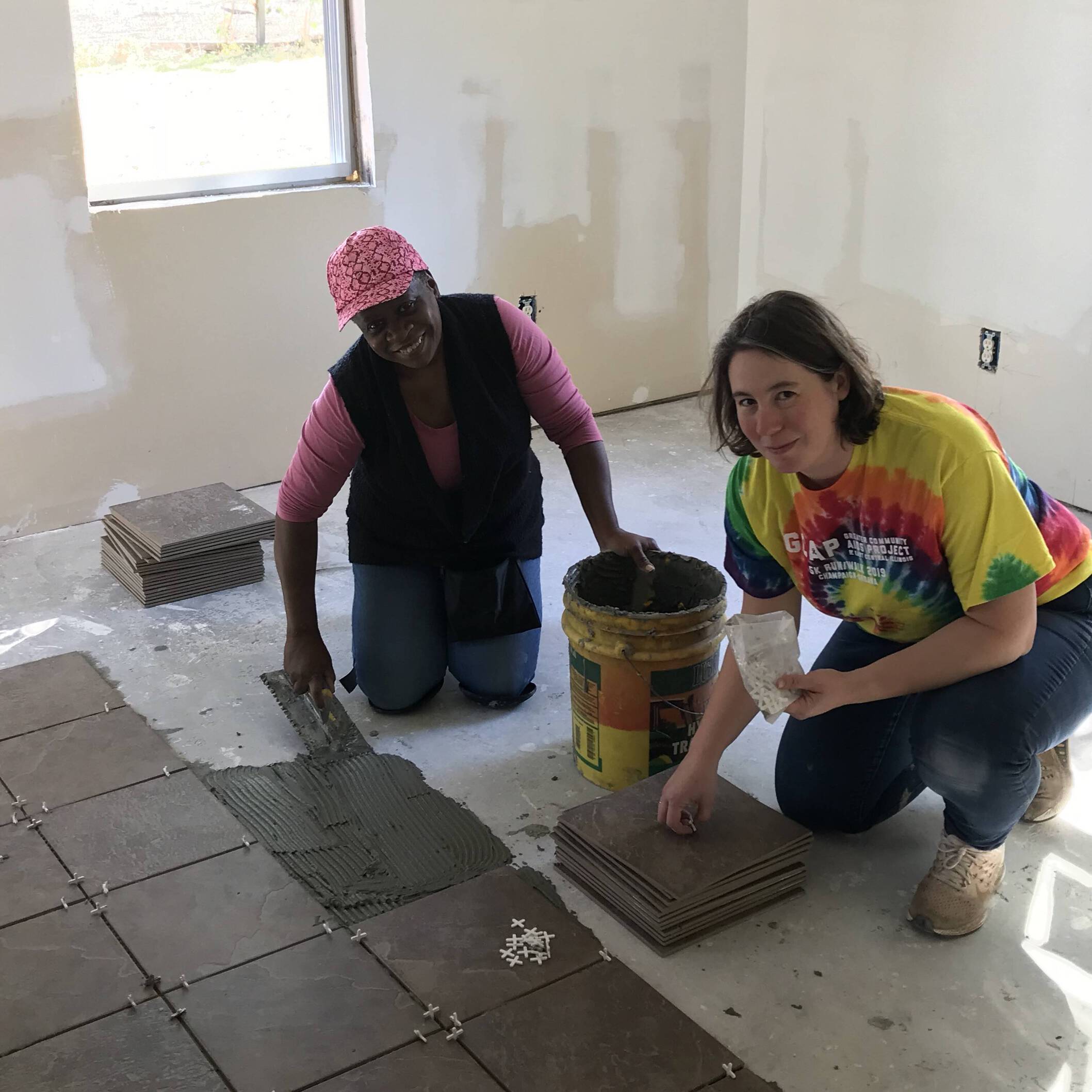 Early in the week, the Urbana group combined Habitat work with explorations into Delta history as well as volunteer work with Spring Initiative. On Monday morning, Ben Williams, in his customary competent fashion, got two work groups established—one at the Edwards Street house, where the tiling crew, under the direction of teacher Sara Jones, began laying ceramic tile, and the other, following the lead of Taryn Smith, continued the interior painting of the 8th Street house, while Mark and Laura provided coordination and supervision. On Monday evening, the group travelled south to the Emmett Till Interpretive Center for a tour of the courthouse where the farcical trial of Till’s murderers took place, and then on the old grocery store in Money where the precipitating event occurred, and back north via the Grabbal Landing riverside location where Till’s body was recovered. In this, they were accompanied by two associate deans from the UI School of Business, in Clarksdale to explore possible collaborations between the Business School and various Clarksdale constituencies, and, by all accounts, it was an intense and sobering introduction to the racial dynamics that have plagued the region for decades. 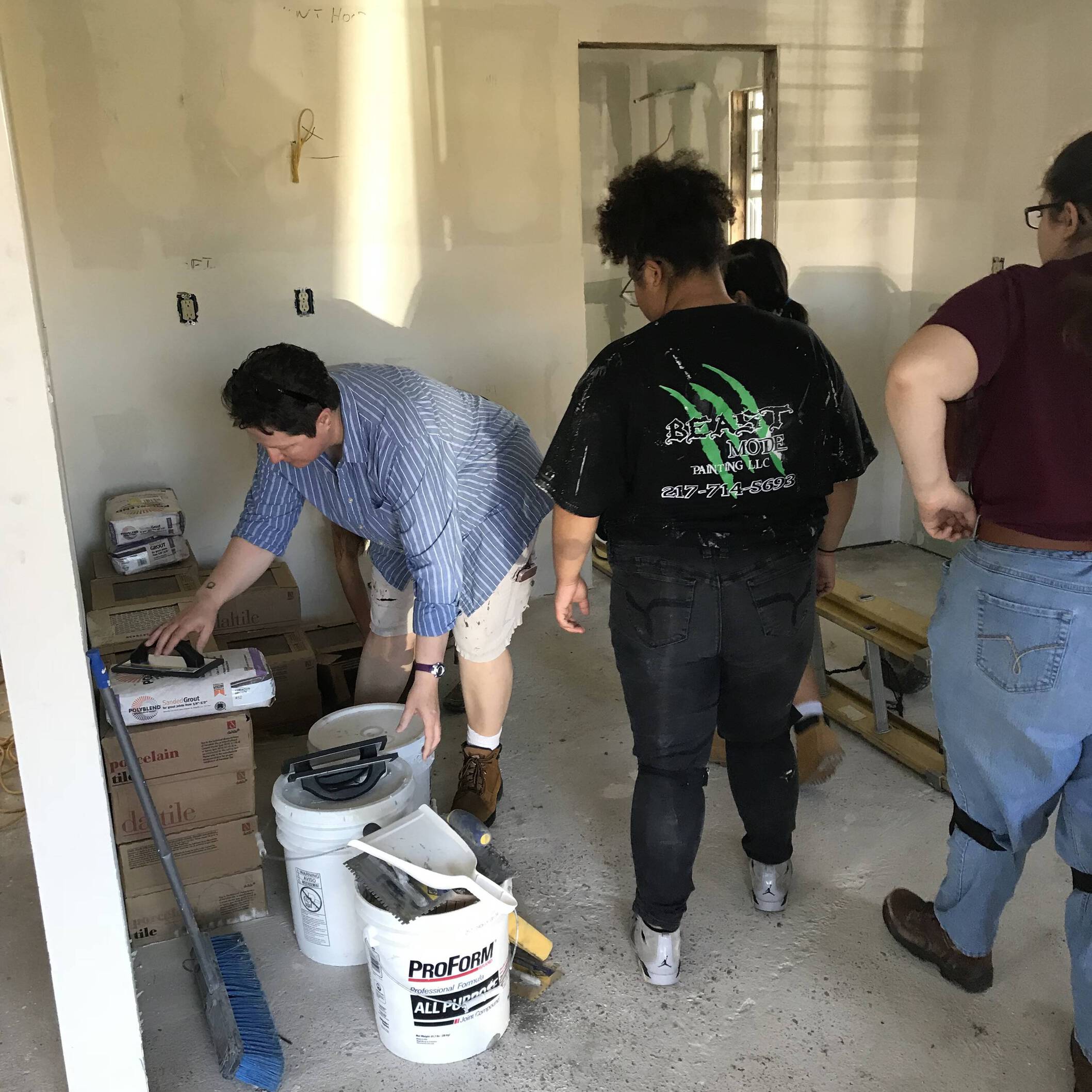 On Tuesday morning, the Urbana crew cheerfully returned to their two worksites, with two students volunteering with Verna and the workers at the Care Station. I, however, was not part of any of that, because Tuesday marked a first for me—two history tours in one day! In the morning, with Spring leader Anja Thiessen and son Matt, we took the two UI deans on a trip around Coahoma County to acquaint them with some of the more disturbing and salient stories of injustice and exploitation that occurred right in this area, balanced by equally compelling and inspiring stories of successful attempts made by local leaders and outside volunteers to counteract the effects of the system of racialized poverty created by this earlier history. Then, after a quick lunch, I repeated the tour with the Urbana students, going to the same sites and telling the same stories, with a special emphasis on the parts played in those stories by their own leaders, Mark and Laura. Both tours seemed to have the desired effects of informing and inspiring—at least, that is my sincere hope! 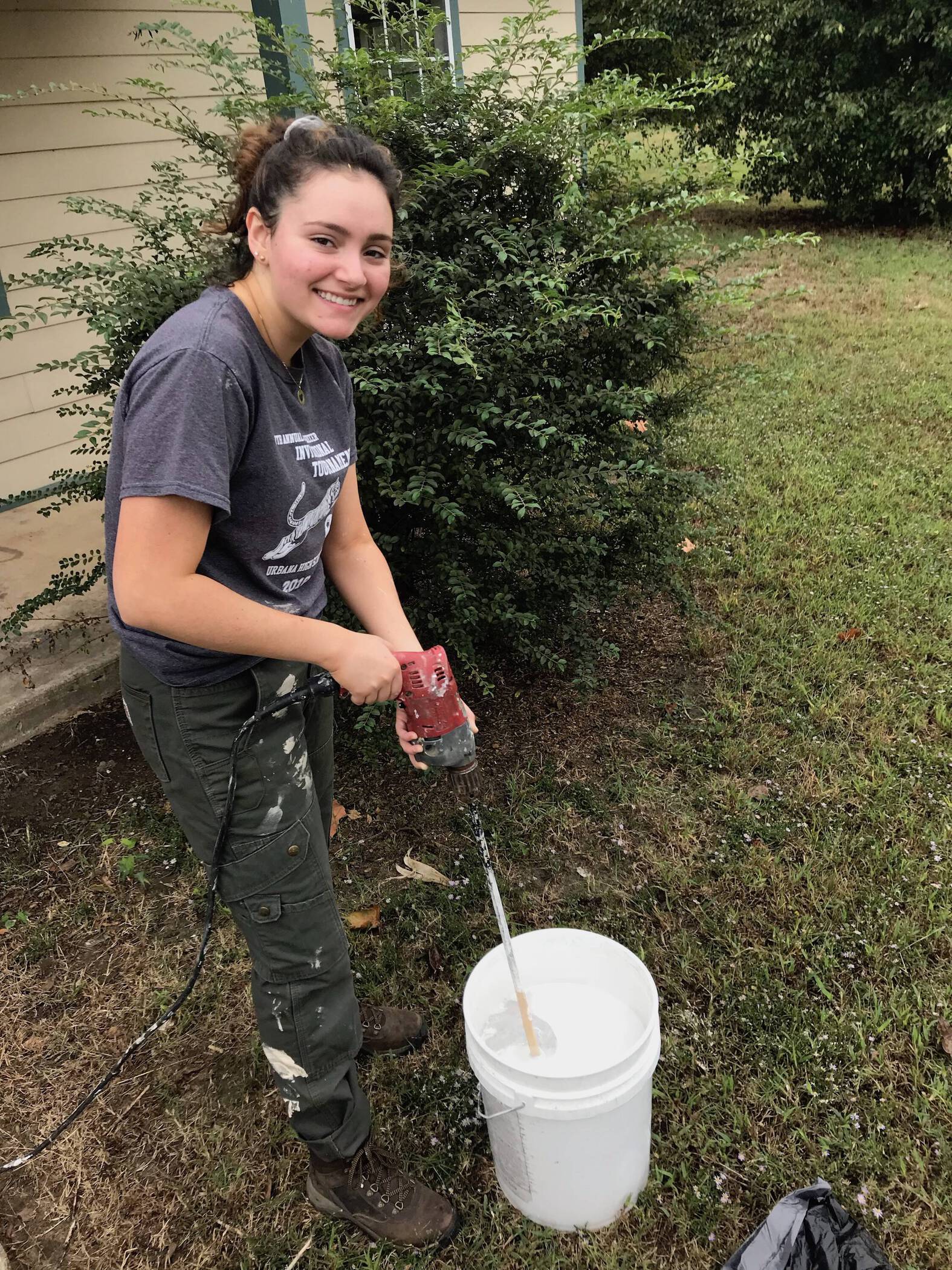 The rest of the week work-wise was more of the same, with the addition, in honor of the beautiful fall weather, of some exterior painting at Alex Henley’s Habitat house. Thursday, as is the tradition, was also Potluck Night, once again hosted by board members, Bobbie and Bobby Butler at King’s Temple and featuring Delta-style ribs prepared by homeowner Elliott Kahaleua. Though the crowd was a little sparse this time around, the spirit of unity and appreciation was as visible as ever. Veronica Kahaleua once again thanked the volunteers on behalf of the homeowners and CAHFH. Board member Bobby Butler spoke of how grateful he was for the volunteers because it gave him “hope for America,” especially important at this time because of the mess in which our generation has left the world. As he spoke I was reminded again of the powerful message I heard him preach back in January—we love God by serving others. 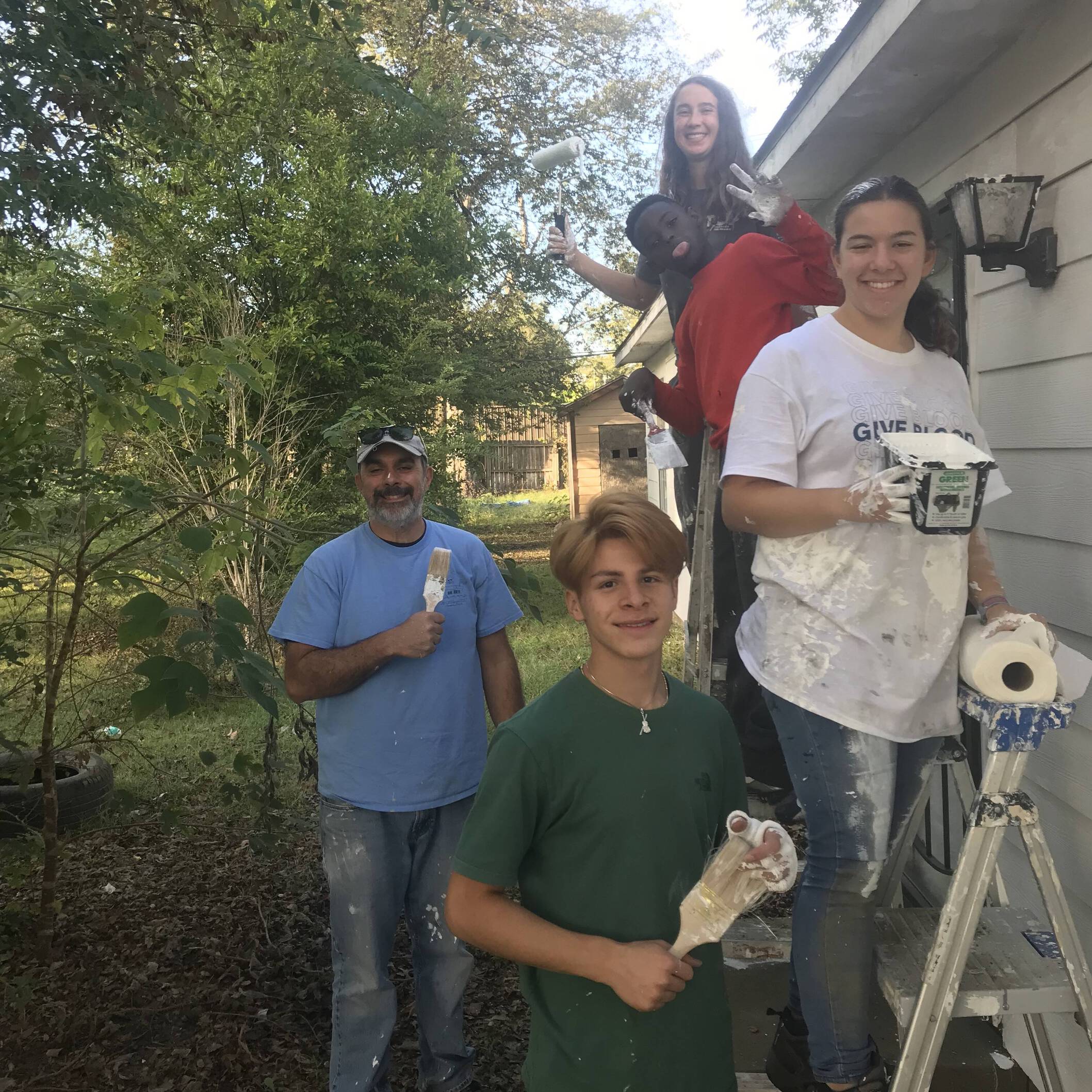 Perhaps the most memorable moment, however, came from an impromptu “spoken word” response from an Urbana student, Darnell Chatman, who graciously re-created it and agreed to let me share it in this post. “Cards of decks. Play the game, been told to play a certain way. Been separated from different types of different looks, acts, thoughts, feelings and emotions. It’s crazy that in a span of a week these people come together. From being strangers, not knowing of each other, judging others, to working with and bonding and loving each other like family. Humans are really powerful through a lot of thick and thin, and spokes between people who pull through really are strong. These people are the leaders, who have the most will, most courage, most everything that they have to offer. I love them all very deeply. I will never trade them for anything else.” Spoken like a true veteran of the Habitat experience, though he’d only been in Clarksdale for a few days!

Friday, as it always is, was finishing day. The tile crew left the Edwards Street house 75% tiled and ready for the next group. Similar progress had been made at the 8th Street house, and the painting crew had not only used up all their paint as they finished 3 sides of the house but also made a new friend in Tyler Franklin, who lives next to Alex. But the most significant aspect of the work occurred at Edwards Street, when board member Lorraine Cancer showed up to work with Laura on tiling the back bedroom. Ben Williams was openly impressed by Lorraine’s dedication, Laura appreciated the comradery on the work site, and I was blessed beyond measure by witnessing the whole thing. It was truly a fitting ending to another remarkable week, and we look forward to seeing the Urbana crew again next October. 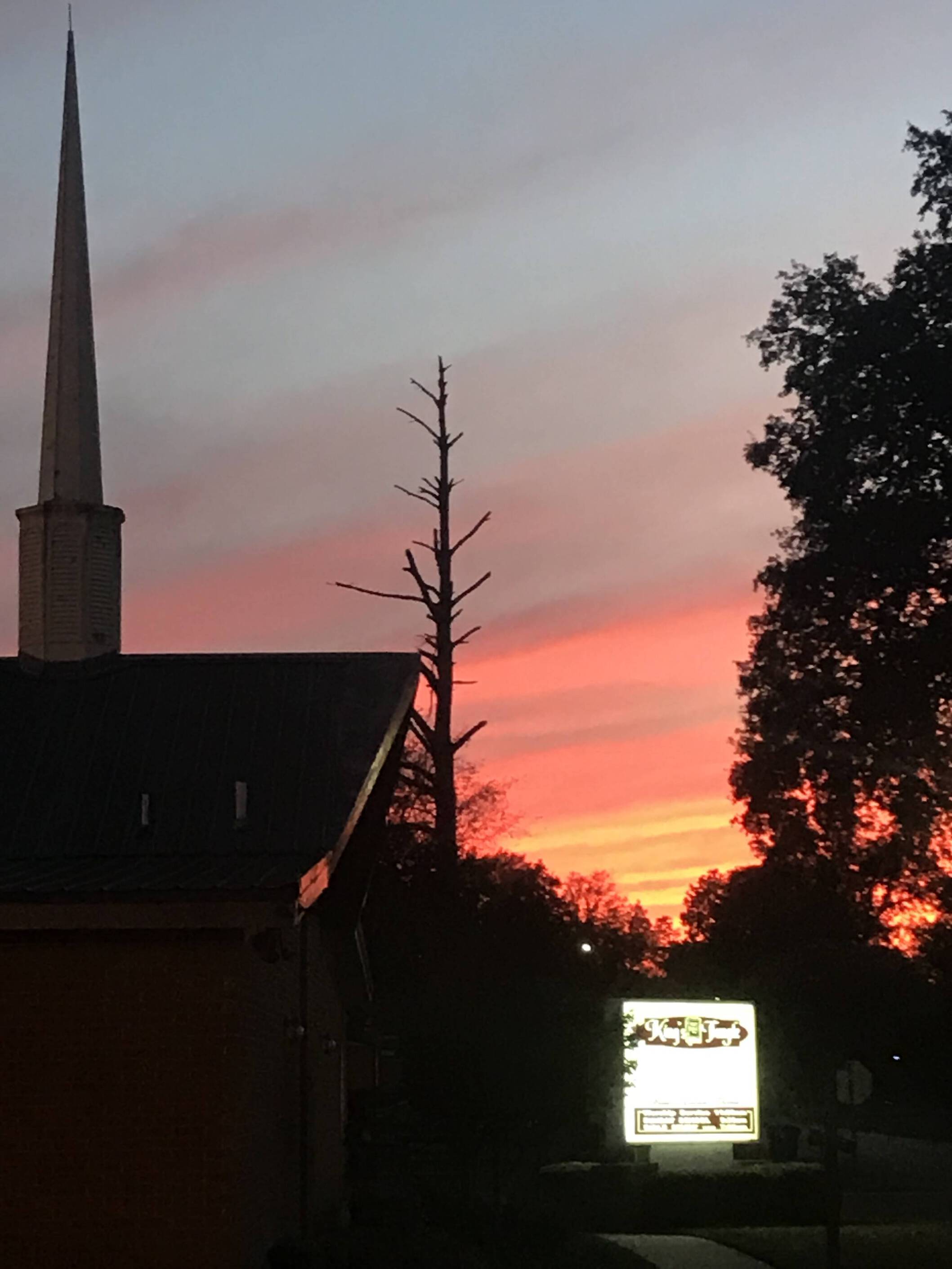