On June 4, 2022, a contingent of bad bikers descended on Clarksdale. The “wild ones” were actually part of a Fuller Center program called Bicycling Adventure. This particular group was on its way from the Gulf of Mexico to Lake Erie, stopping regularly to meet and build with various Fuller covenant partners, and it was our good fortune that they arrived in Clarksdale on a weekend. This meant that we got to interact with them (briefly) Saturday night, all day Sunday, and all day Monday, as they both got acquainted with Delta dynamics and worked on our 50th house! They had spent the previous day with the wonderful Leland covenant partner some 60 miles away and trickled into town after surviving a torrential downpour. They had started from all over the country (including one volunteer from Alaska!) and were an inspiration to all who encountered them. 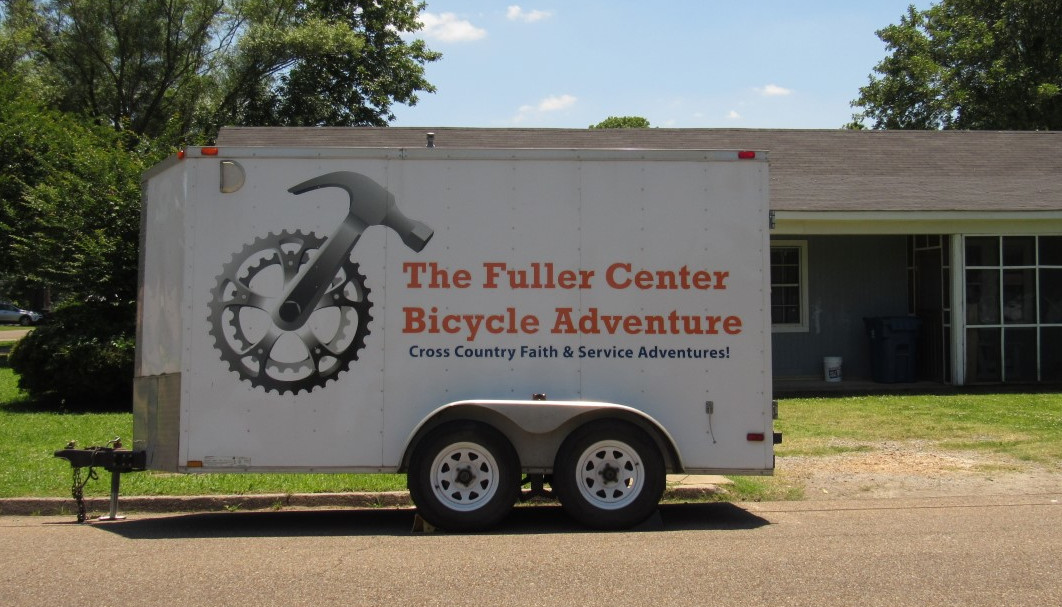 On Sunday afternoon, a small group of BAs (as we liked to call them) accompanied the new Executive Director, JoAnn Blue, and Bill Sutton, Board Chairman, on the CAFCH-sponsored Coahoma County History Tour, which takes eager neophytes all around the area, exploring key historical events that highlight the exploitative roots of the “deep disadvantage” CAFCH is trying to address, discussing the rich history of HFH and now FCH in the county, and introducing them to the stories of indigenous leaders and relocated volunteers who have played a significant role in the housing ministry success stories of the Clarksdale region. Then, that evening, the group (along with a crew of veteran volunteers from Holy Family Catholic Church in the Chicago area) was treated to a CAFCH potluck, admirably administered by Board members Lorraine Cancer and Vice President Bobbie Butler but (unfortunately) a little sparsely attended due to a rash of recent COVID cases in the city. Nevertheless, fun was had by all, and, thanks to the copious contributions of the homeowners, there was plenty of good food!

On Monday, after devotions and meeting with Spring Initiative founder Anja Thiessen, the volunteers got to serious work. The Holy Family folks put their skills to good use in replacing rotting siding on a former Habitat house (now owned by a local family) close to the dorm. At the same time, the bikers were helping Ben Williams finish preparation for the pouring of the slab for the 50th house and then chiming in on the action as the cement trucks arrived that afternoon.

The 50th house that the Bicycling Adventure volunteers began is the prototype for a larger CAFCH endeavor we are calling the Starter Home Project. Starter homes are, by design, smaller housing units, more affordable in these days of inflated construction costs and more amenable to the needs of our targeted clientele—young people with one or two small children. One of the many challenges faced by these young Clarksdalians is the lack of decent, affordable housing, where they can live without the distractions of overcrowded living spaces, where they can safely raise a family, where they can increase economic power through the building up of home ownership equity, and where they can contribute to the well-being of the entire community. Related issues involve overcrowding as a hindrance to education success and as a roadblock to developing good time management skills. Overarching all of this is a generational sense of hopelessness, as many young Clarksdalians have known only poverty for decades. To combat these ongoing challenges, we hope to provide young homeowners with a stake in the communities they are building. With the educational skills of our construction supervisor on hand, we plan to enlist local youth in the entire construction process, both as volunteers and as part of a job training program established with other local non-profits. The bottom line in all we do is to offer dignity and hope to young people who have often seen neither. And the BA volunteers got us off to a great start!

Suzanne Ginger, one of the volunteers participating, provided us with this summary of her three days in the Delta:

On a hot June Saturday afternoon, 15 Fuller Center Bike Adventurists pedaled into Clarksdale, MS to participate in a construction weekend Locating water and shade was an immediate quest, yet we found so much more during the next three days.

The Fuller Center’s expressed mission is to partner with local folks in providing housing for the economically challenged, but we also learned about the impact of the “deep disadvantage” of which substandard housing is just one aspect. It’s one thing to visit a town and hammer here and to frame out a roof truss there. Understanding why help with housing helps, well, helps.

Enter transplant Bill Sutton. Formerly a Midwestern high school history teacher, he has brought students to Clarksdale for 25 years to spend a work-week with the Fuller housing ministry, As part of their experience, they take a History Tour which introduces them to the historical background of economic and cultural life in the Delta. Seven of us got to experience the same history tour, which emphasized that the poverty here is neither accidental nor incidental but rather purposeful and foundational, that vital indigenous leadership has emerged through the Fuller work to combat those inequities, and that a number of outsiders, like his family and 6 other former students who have relocated here, have joined in those efforts.

But dealing with the “deep disadvantage” of the Delta also created a richness. Blues music flourished and still flourished here. So do church communities. Both were evident as several of us cycled through the streets on Sunday morning before services. And a local congregation turned out enthusiastically to feed us hungry bicyclists and to wish us well, plying us with fried chicken and homemade salads Sunday night, before we began our construction work on a warm Monday morning.

By that evening, supervisor Ben Williams had led the cyclists through pouring a house foundation. He guided us through building rafters for roofs. And he got us to laugh, despite the rising temperatures. “You can do it,” he told one lady, as she nervously urged the power saw to bite into a scribed 2 by 4. 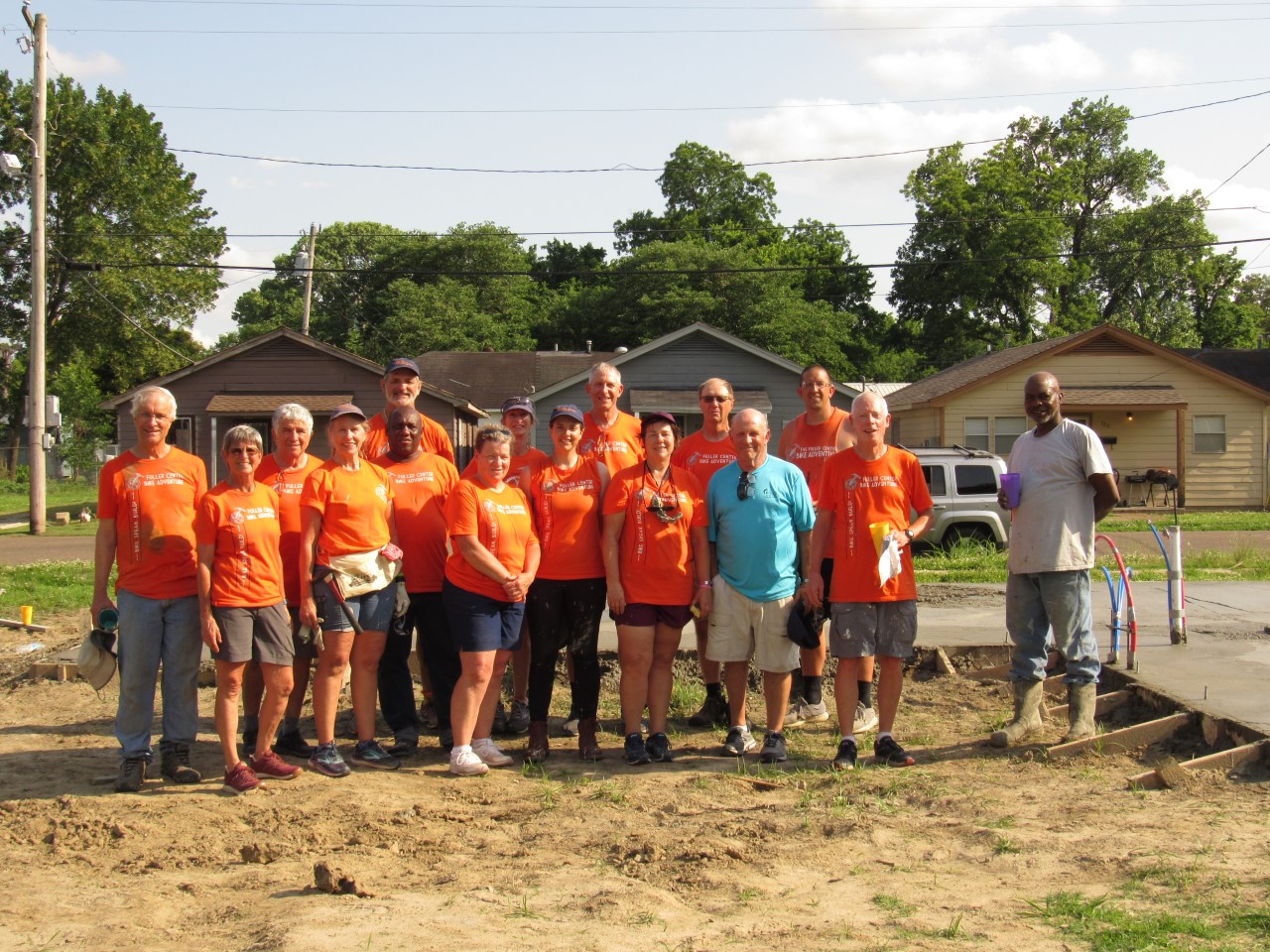