At the end of June 2021, CAFCH was blessed with a visit from vagabond volunteer par excellence, Bob Pack, originally from Blacksburg VA and now from Florida. Bob had been volunteering for Habitat for Humanity and now the Fuller Center for over 20 years, and his work has taken him all over the US and to various foreign countries. He came to us highly recommended by Stacey Driggers and she was right on target again with her suggestion. Having never been to Clarksdale, Bob quickly acquainted himself with the dorm and construction supervisor Ben Williams, and their partnership proved to be immediate, compatible, and productive.

The project for the two carpenters was possible because of the construction freedom we now enjoy through the Fuller Center. A few months earlier, I had been at the dorm in Riverton when I was approached by a woman who identified herself as the sister of Rev. Melvin Hackett. Rev. Hackett had just purchased a stately, old, two-story church building and he needed a ramp built for elderly congregants to be able to access the sanctuary. But the challenge was a significant one—too much for amateurs—so the Hacketts wondered if the Fuller Center could help them build a wheelchair-accessible, up-to-code ramp. They would buy the lumber if we could provide the volunteer labor. It all sounded kind of strange to me, but, for some reason, I did not decline the request out of hand (we build houses, after all, not ramps). Instead I told them I would refer it to Ben Williams, to see what he thought. He dutifully checked out the church and came away impressed by the scope of the challenge, but we decided to pursue the opportunity when the volunteer situation became amenable to such work. And Bob proved to be that amenable volunteer—competent, cheerful, and up for a challenge. Hopefully, the accompanying pictures will indicate what a significant challenge this was.

Without benefit of blueprints or even a rough sketch, the two men plotted their strategy and the rudiments of the ramp began to take shape, even as they continue to figure out on the fly what the next steps would be. Soon the structure descended from the doorway, roughly 15 feet above the plane of the sidewalk, made 5 turns as it followed code requirements downward, and ended up on the edge of the parking lot, facing the opposite direction from where it started. It was a prodigious accomplishment, made even more impressive by the fact that it was carried out in the midst of famously oppressive Delta heat which had to be endured, but the men prevailed and formed a great working bond in the process. Ben and I were both sad to see Bob leave but very hopeful about further projects we might pursue with him in Clarksdale in the future. 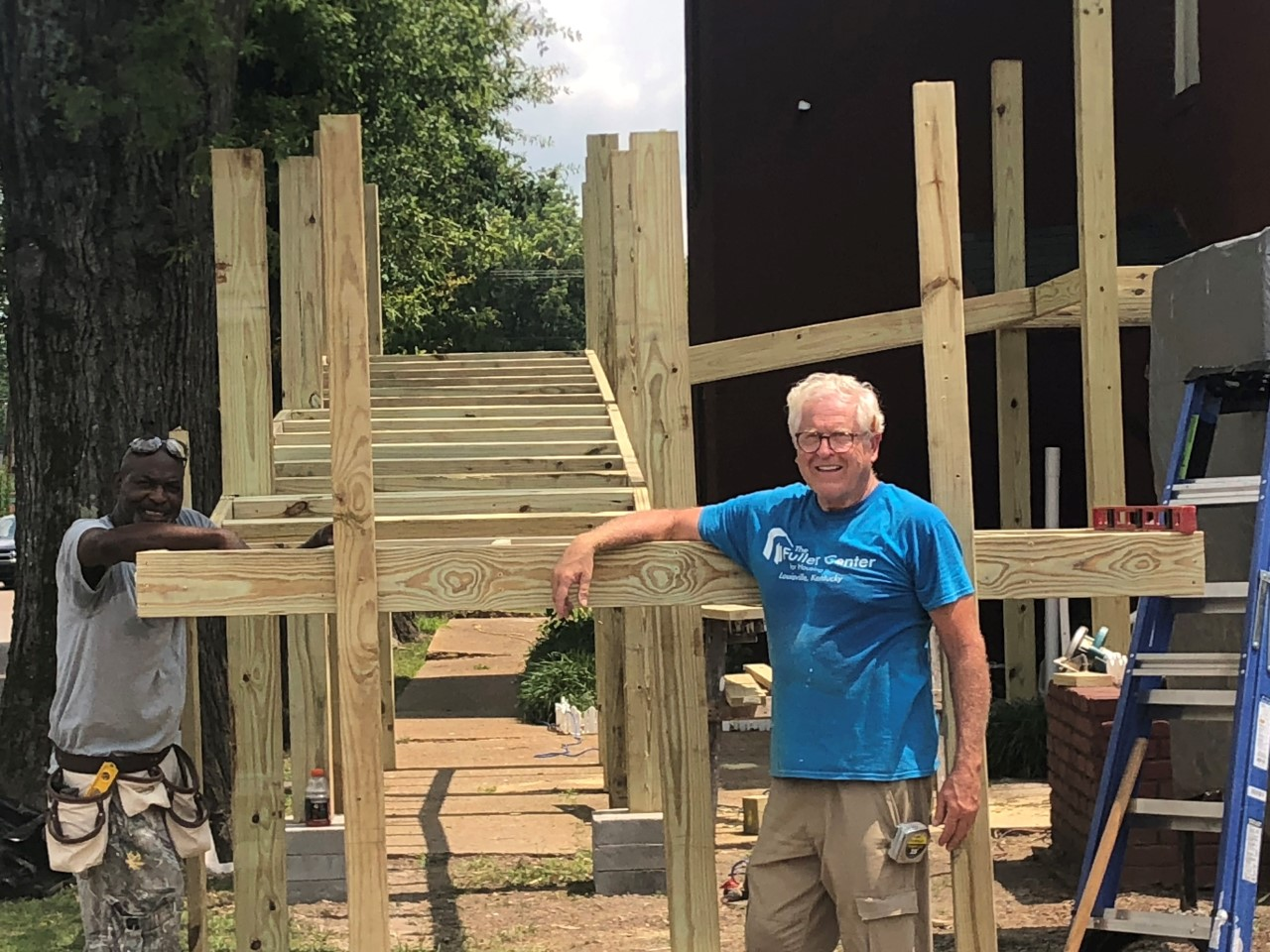 While the full scope of the ramp project remained to be finished at a later date, it was time again for the return of the St. Francis Xavier stalwarts, by now into their second decade of Clarksdale volunteering. In mid-July, after a year’s absence thanks to COVID, the first group arrived, led by veterans Oscar Longoria and Keith Kline. This crew, consisting of the leaders and 5 young SFXers just about to head off to various Midwestern colleges, braved the Delta heat to successfully re-roof one Fuller house and a shed and to get things prepared for another reroofing. 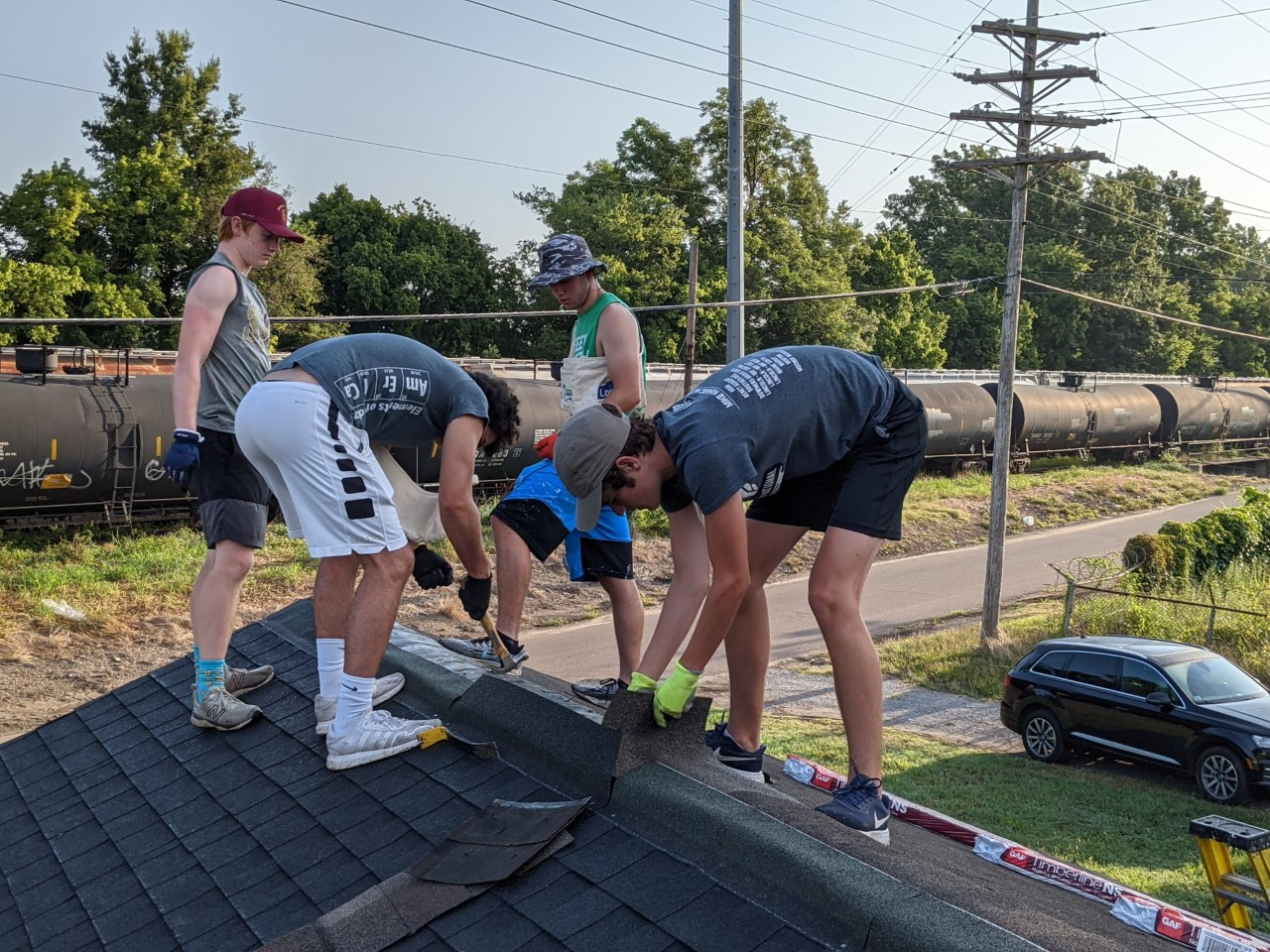 They were then followed by a larger group, led by the three board members, and including a wide assortment of family members as well as Sharon Fitzpatrick, Tom McGovern, and Tim Havlin and more family members—22 volunteers in all, and ready to work hard.

During their week, they reroofed two more homes, performed various repairs on three more houses, and got the Stairway to Heaven, as it was christened by the irrepressible Tim “Sparkplug” Havlin, sufficiently completed for Rev. Hackett to move forward with his plan to open his church at the end of August. All in all, the ramp project was a formidable task, but has now become known as the eighth wonder of the engineering world. The SFX effort, as always, was impressive, as was the generosity with which they graced the Fuller community. And even the weather cooperated, as the rain forecast for part of the week materialized only during non-work hours and the brutal heat saved itself (mostly) for after they left. 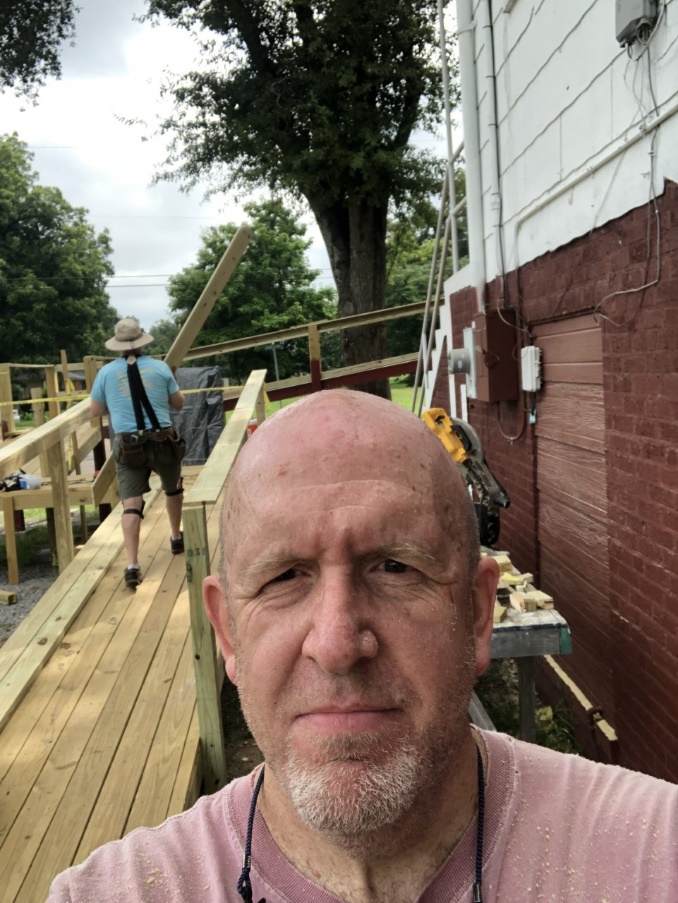 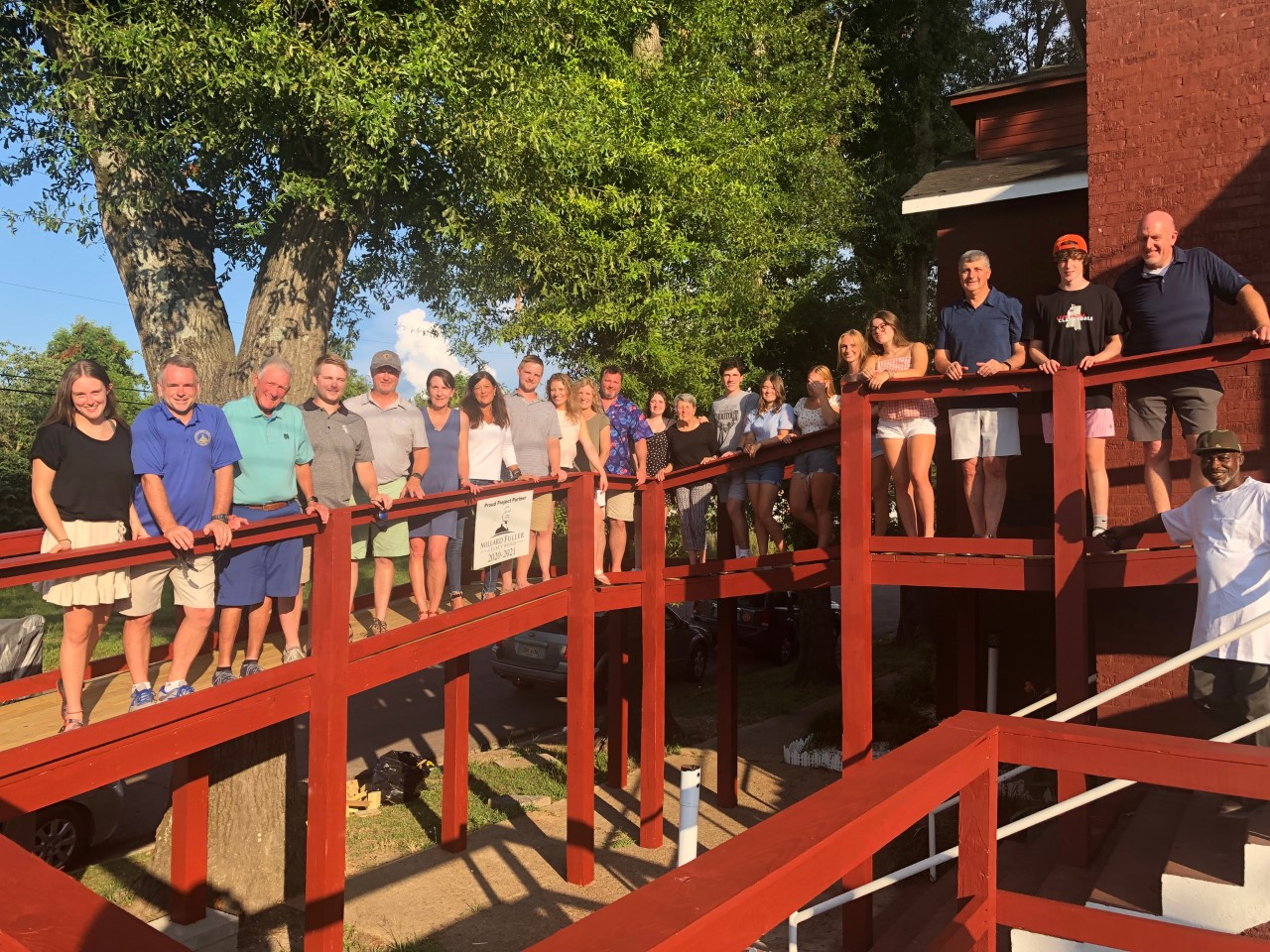 One of the SFX volunteers was Grace Weismantel, niece of longtime volunteer and Board member, Bob Albertini. She had never been to the Delta before, nor had she picked up any construction experience in her short life, but she, like the other newbies, took to the work like ducks to water. Soon after her return to SC, she went off to college, where she wrote an essay in her freshman English class about her summer experience in Clarksdale. With her permission, I have excerpted some of it, as it is an excellent reflection of the dynamic that CAFCH seeks to foster among volunteers.

“The summer before my freshman year of college, I was informed that I would be spending a week in Clarksdale, Mississippi building houses for the Fuller Center for Housing. My mother and sister would be attending with me, but I felt horrible for not wanting to go. I would be completing community service, working with my family, and going to a place I had never been before. While it seemed like a decent way to spend my week, I could not get myself to feel excited. All I could think of was the time I was losing with my friends before I went to college. My mood did not lighten throughout the entire 11 hours in the car. As we entered Clarksdale, my mother urged me to look out the window and see . . . . rusty old gates, roofs with ripped up shingles, and walls with peeled paint.

We pulled into the house we would be staying at, and were greeted by my uncle, who had been a part of the program for 12 years and was leading our team’s project. I met the other twenty volunteers I would be working with, some of whom have been coming to Clarksdale for over 10 years. After hearing about some of their past projects, I was amazed that this program would encourage people to continue coming to Clarksdale for so long. However, I had a new fear that my inexperience would mean that I would be useless in helping build the house. We were later given a tour of the town, where I saw all the houses that the Fuller Center had built for families. I could not believe how so many people could come together over the months to create something that would do so much good for people. Being around the volunteers and meeting many of the inhabitants of Clarksdale made me want to be a better person. I was eager to do any work I could to help. We were later informed that we would be repairing multiple houses in the community. One of our duties included putting new shingles on old roofs. We would sit on scorching hot materials for hours, continually nailing shingles with the occasional hit on the thumb instead of the nail. I was tired and sore, but I was proud. . . . I had never before been in a position where I could see the final product of my work done.

. . . . As we were driving back to the house, my uncle asked me what I thought of Clarksdale and I honestly didn’t know what to say. It seemed like a whole other world, and yet it was a day’s drive. I had never worried about my insurance, worn roofs, or money for groceries. It later occurred to me that people still lived that way in Hilton Head, I just never focused on it. I was also faced with the wealth gap that I saw in Clarksdale. The house we stayed in was near the other projects we had around Clarksdale, and I often wondered which one of the houses we would be placed at to fix something. . . . 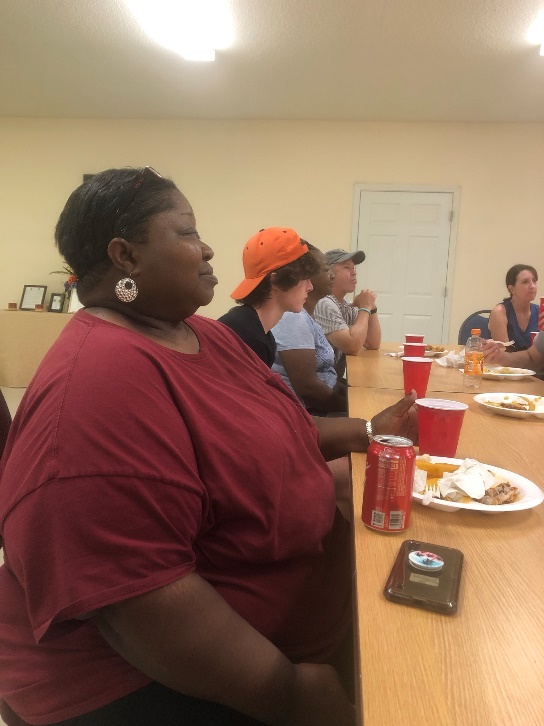 The night before I left Clarksdale, we had a potluck with the townspeople who lived in houses Fuller Center built and those whose roofs we fixed during the week. They were so happy and excited to meet us, and I was so shocked to think that I had something to do with that, no matter how small the part. I knew that I had to come back in order to make more people smile. Being faced with the amount of privilege that I have grown up having, and being introduced to an entire town filled with people of a different lifestyle was hard for me. The experience has given me a new appreciation for my home without a leaky roof, the food on my plate, and the bed that I sleep in.

When I chose my major of Economics, I knew I wanted to use what I would learn to make the world a better place, but beyond that I was lost. After visiting Clarksdale, I was able to give more consideration to my plans after college, and wanted to continue building communities up with the assistance of the citizens.”