In mid-March, CAFCH was overjoyed to welcome back Cornerstone Fellowship from Urbana, IL returning to the Delta after a two-year COVID-enforced hiatus, and to make the joy complete, their longtime Fuller friends, Margaret and Marlay Smith, stayed on from their week with St. Michael’s for another few days. Their work included more demolition at the Paramount, an incredible amount of much-appreciated computer work at the CAFCH office, and, finally, some actual construction, because, by the time they arrived, the plans for the 50th house had finally begun to take serious shape. And that development is a story unto itself.

As post-COVID realities set in, CAFCH realized that building costs for a “normal” house (for families of 5-6) might be becoming prohibitive. At the same time, we were made aware of the fact that a number of Clarksdalians—single parents with a child, young couples just starting out in the world, and older couples looking to spend their latter days in a decent home—were desperate for help with affordable housing. To this end, we were approached by a local group eager to sponsor the construction of smaller (and therefore less expensive) houses, as “starter homes” in a single neighborhood, to facilitate community and to encourage the creation of homeowner equity.

The Starter Home neighborhood concept had actually been a matter of discussion for a number of years in Clarksdale, as the Tiny House model was becoming a fixture in affordable housing circles. In March, local businessman (recently cited by Delta Business Magazine as its Man of the Year) Dudley Barnes brought a concrete proposal to CAFCH. His offer included a significant financial incentive, the free services of an ace local architect (his uncle, John Barnes) and his own personal involvement—all of which were gratefully received by the covenant partner! And just like that (since 90-year-old John Barnes is still at the top of his formidable game!), construction supervisor Ben Williams and affiliate coordinator Gramm Phillips had drawings in hand, ready for the detailed construction schematics, badly needed so the Cornerstone folks could get to work on them. 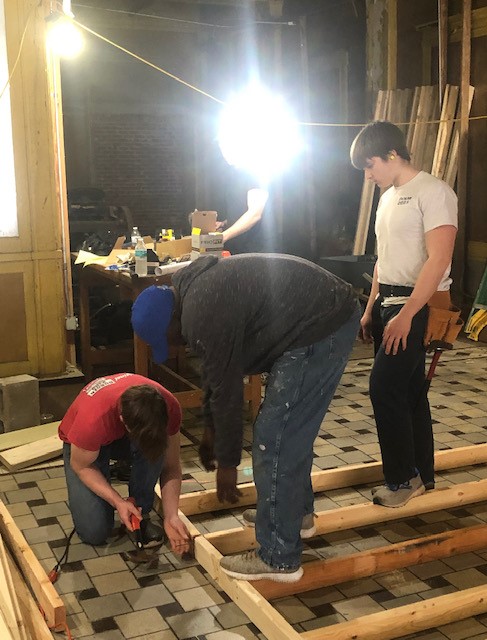 Ben supervises Nico and Gabe as James Boyle’s head explodes in a flash of brilliance!

The process of making corners, headers, and doorways was quickly taken care of. While they were working on those, however, another local angel appeared—this time in the form of longtime Habitat friend Richie Dickson, who, almost overnight, provided the work crew with what they needed to build all the walls, interior and exterior. This work, again, was carried out in the Paramount space, graciously offered by Griot, who also made their coffee shop available for our nightly meetings. Those meetings included times of worship, for which the Cornerstone crew is rightly celebrated and in which they were joined by CAFCH’s own Gramm Phillips, who, besides being an excellent AC, is also a local musician of renown and a worship leader at the First Presbyterian Church. Gramm picked right up on the Cornerstone songs and then serenaded the group with a beautiful rendition of an old Led Zeppelin “hymn,” backed up by the violin, percussion, mandolin, and guitar work of the ‘Stoners. For those thirsty for such worship experiences, it was a godsend! And the tradition was continued at our first, much-appreciated post-COVID potluck, also held at Meraki. 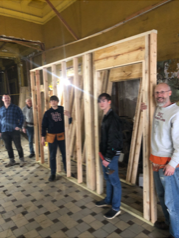 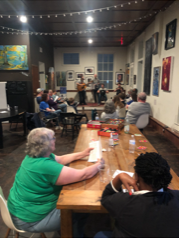 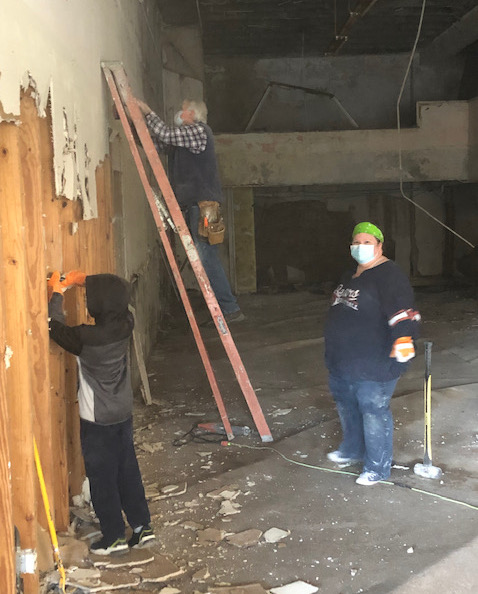 By the time the Cornerstone crew was ready to return to IL, then, the CAFCH office was enjoying a new computer and printer and the software needed to run them both. In addition, the walls for the 50th house sat safely in the Paramount, waiting for the pouring of the slab in order to become the framing for the 50th house. And for those of us who had once called Urbana home, thanks to prayers, personal support, and worship of the ‘Stoners, were left with a deep experience of having been somehow “home” again.


« THE RETURN OF ST. MICHAEL'S AND ANOTHER FULLER BLESSING
Archive
ENLISTING BLUE TO FIGHT THE DELTA HOUSING BLUES »
