In the dim, dark recesses of our collective memory, we at CAFCH vaguely recall the beginning of the construction of a Habitat house at 514 S. Edwards in Clarksdale. The slab must have been poured sometime in the spring/summer of 2017, because in July of 2017, intrepid volunteers from St. Francis Xavier Catholic Church in LaGrange, IL were hoisting the first walls, and by the end of that summer, the shell was complete. It was a promising start. 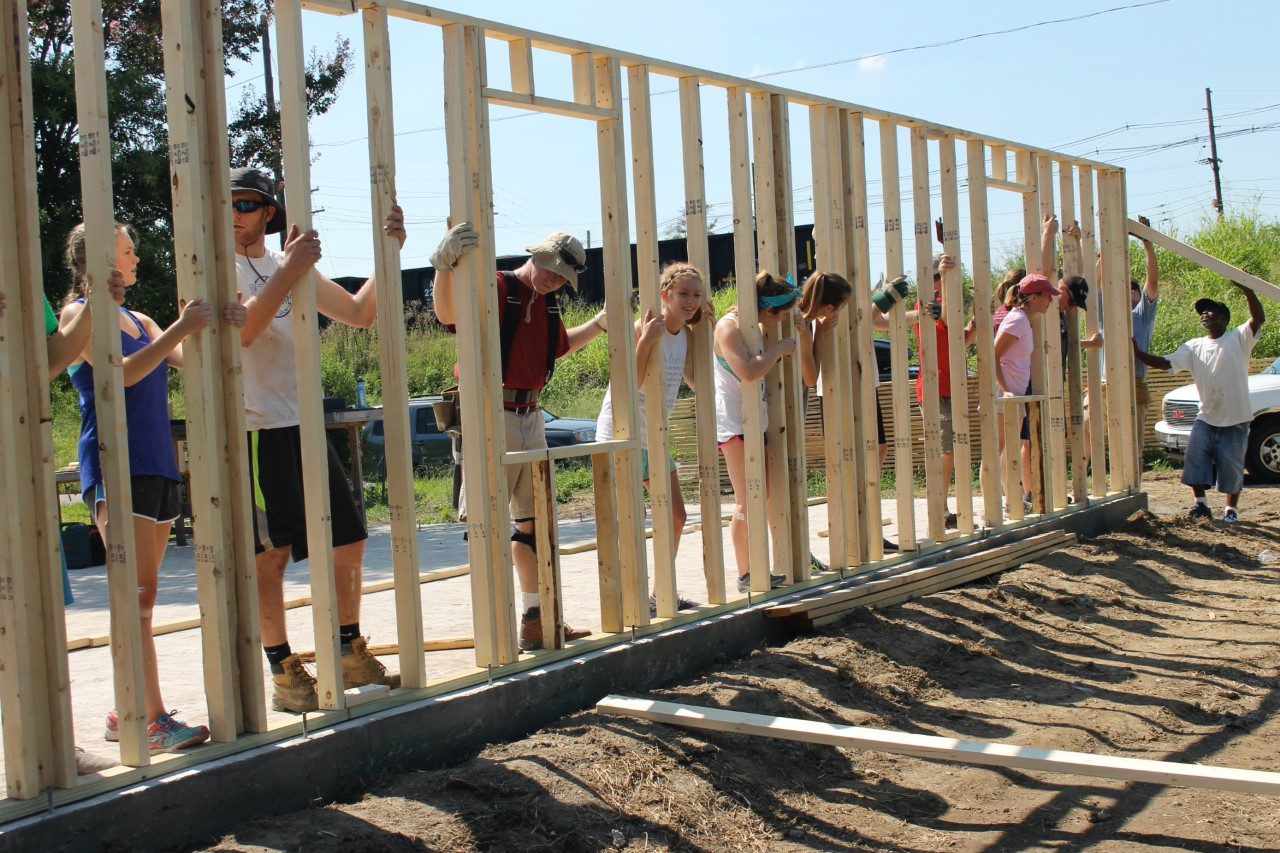 In the Spring of 2018, the trusses were completed and the house was ready for its roof, which was successfully affixed by student volunteers from Uni High in IL, under the expert supervision of Ben Williams. Later, students from Paxton-Buckley-Loda High School and Bradley University also in IL began the process of siding the house, which was completed by yet another SFX crew in the miserable heat of the summer. 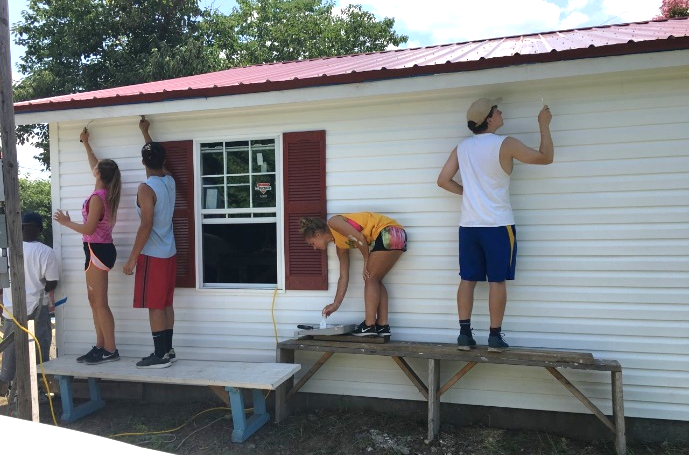 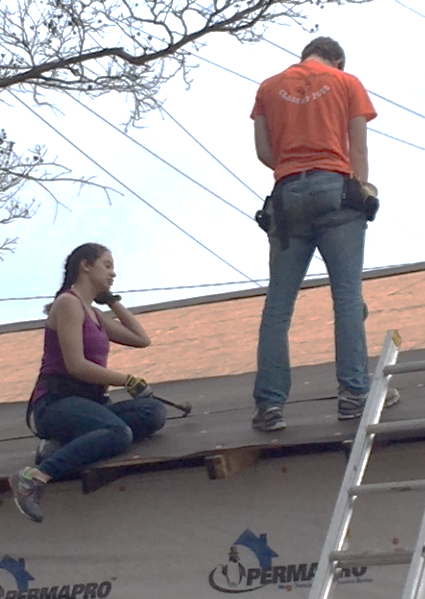 In the chilly, rainy weather of February 2019, another group of Uni students began working on the interior of the house, hanging drywall and completing other tasks. Due to a number of unfortunate organizational complications, however, the house had yet to find a homeowner and progress was frustratingly slow. None of this, however, seemed to bother the volunteer crews who kept on coming—from PA, MN, and all over IL. And, by the summer, the drywall was ready for mud, which was happily and effectively applied by Ben and another hardy SFX crew. 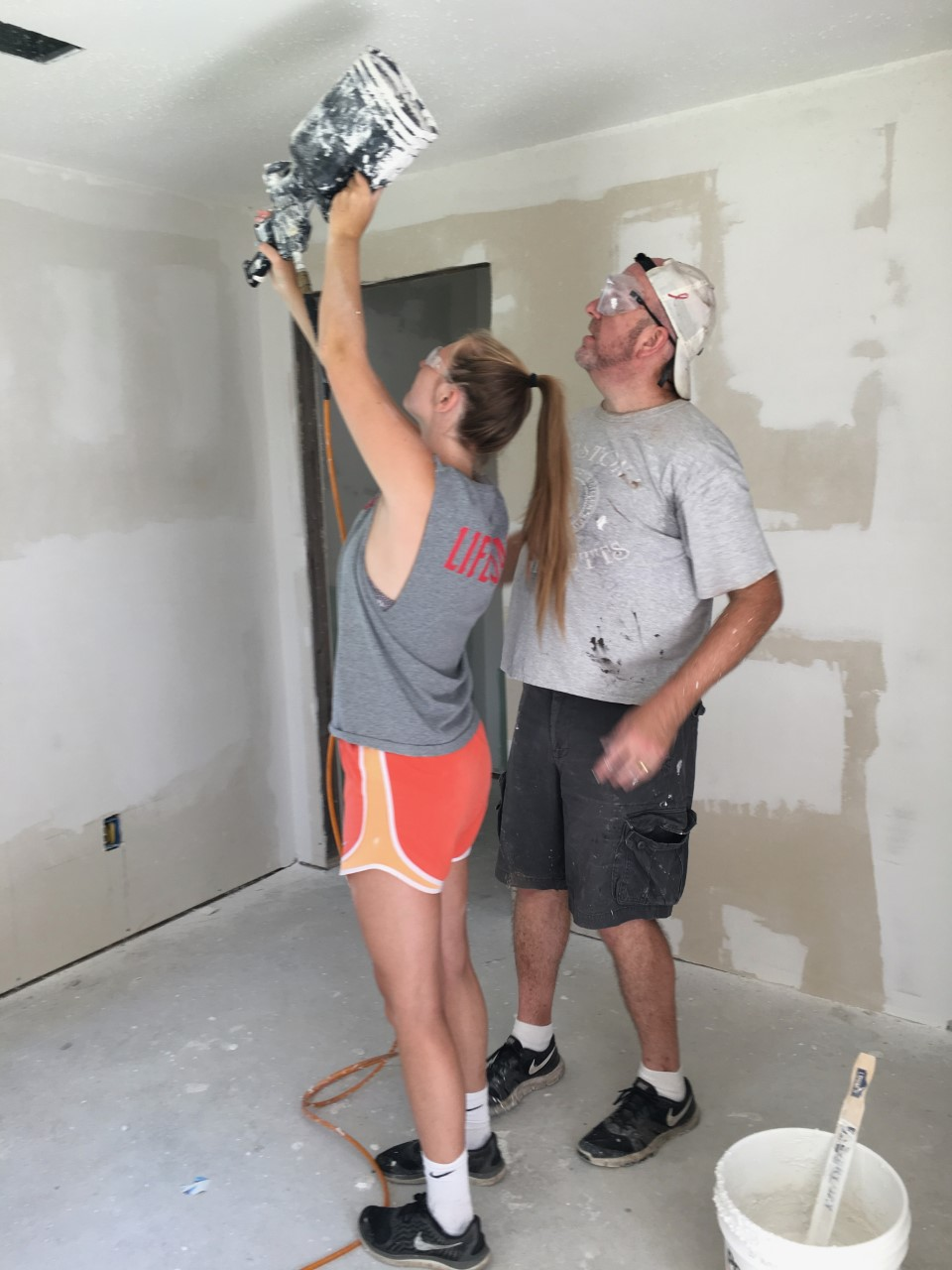 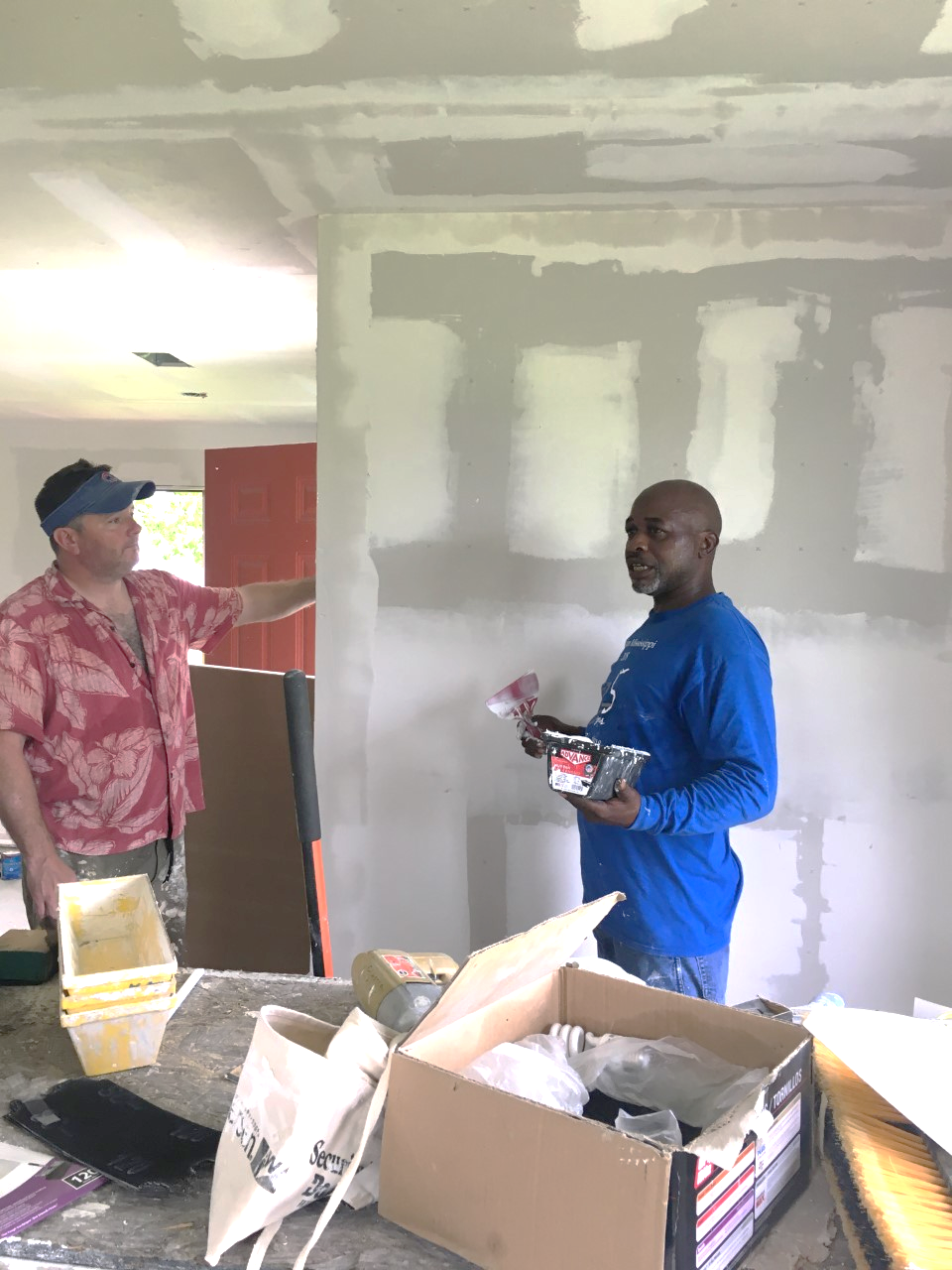 In October 2019, students from Urbana High School in IL came to the Delta for their second trip of the school year and collaborated with CAFCH board members to begin the task of laying tile. Two months later, a group of Uni High alums and their friends and family from ME, OH, CA, and IL inaugurated the 2020 work year by finishing that tiling, as well as by preparing the kitchen cabinets for installation. 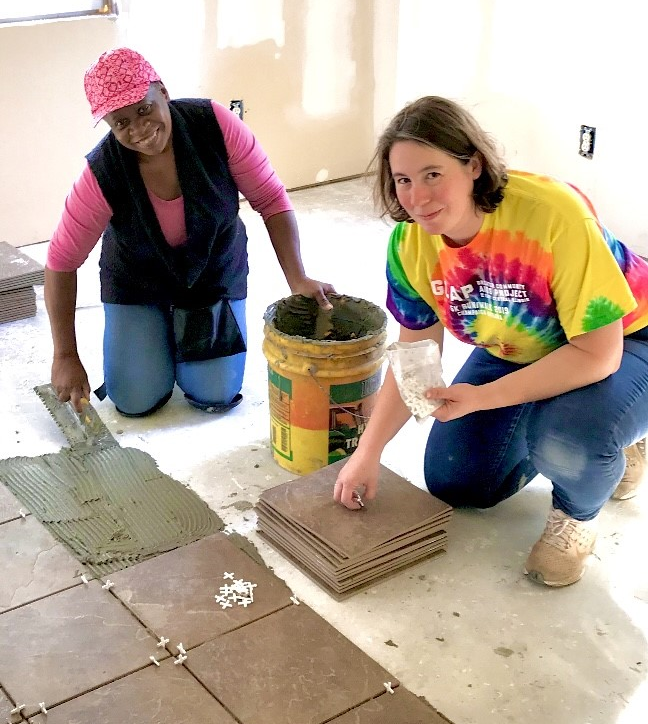 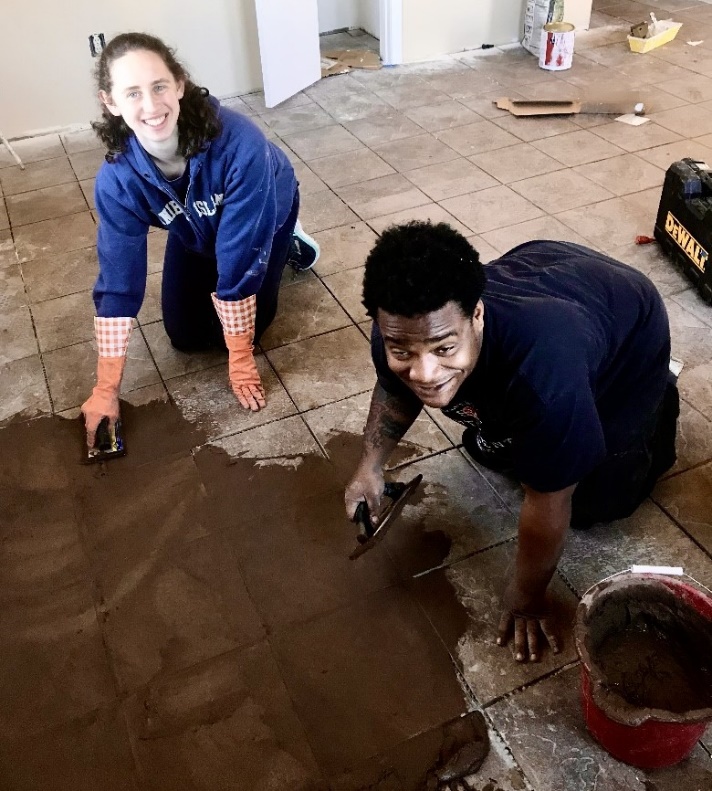 And, finally, with the advent of a new decade and some hard-earned organizational clarity, the house on Edwards looked ready to complete. All we needed was a homeowner!

In January, the new board of directors identified Shequita Carter, an employee of the Head Start program, as its choice for the “new” homeowner. Shequita, a young mother of three, had been living in a small apartment, in an overcrowded complex where she was afraid to let her children outside to play, so the thought of bringing them into a safe environment on Edwards St. was a compelling factor in her decision to partner with CAFCH. All of us were immediately happy with our choices! 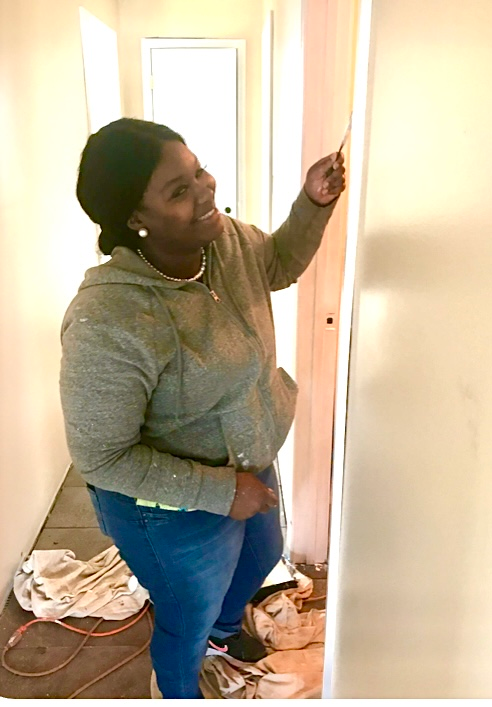 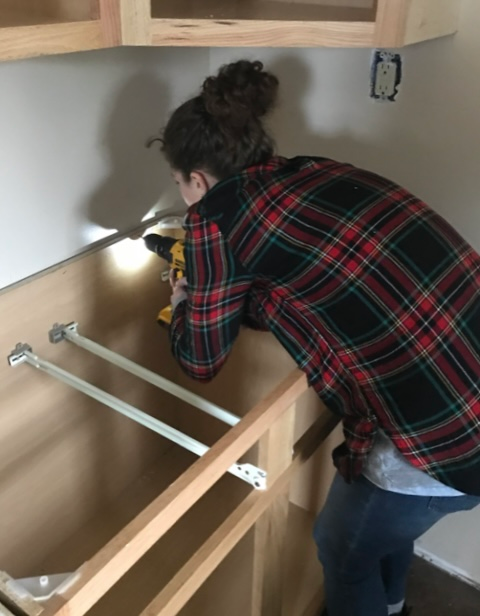 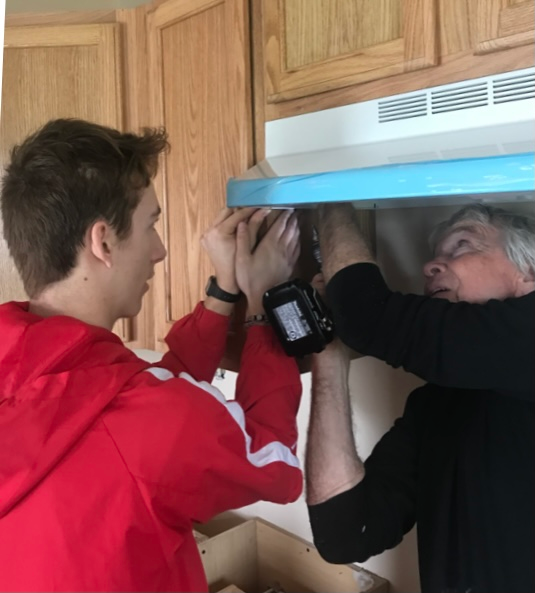 In February and March 2020 more veteran volunteer help from Uni High and newcomers from St. Michael Catholic Church in Stillwater MN allowed us to make significant progress, with a reachable goal of getting the new homeowner in by June (three long years after the project had begun). But then COVID hit, shutting down all Fuller construction and pretty much everything else for the next 12 months. As it was for everyone everywhere, this proved to be a particularly trying time calling for patience, perseverance, and prayer. Somehow, thankfully, we found them all.

On March 14, 2021, almost exactly a year to the day after the Minnesotans had left Clarksdale, a volunteer group from GA broke the long drought for work crews. Led by Fuller VP for Operations Stacey Driggers and consisting of students and staff from Georgia Southwestern University, the properly masked and semi-vaccinated workers put most of the the finishing touches on the Edwards St. house, even leaving the premises with a brand-new Stihl lawnmower, delivered by Fuller President David Snell just for the occasion. 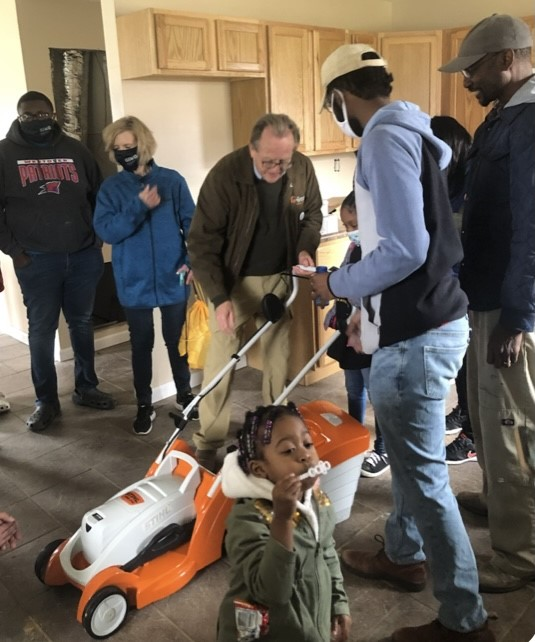 Two months later, after the requisite and apparently unavoidable struggles with deeds and other paperwork, and after the appliances generously donated by the same SFX volunteers that had started the work back in 2017 had been installed, Ben, Shequita, and her family completed the last of the trim work. On May 21, 2021 Shequita and her family moved into 514 S. Edwards and the long wait was over. As Shequita herself testifies, it wasn’t always clear that there would be such a positive end to such a convoluted saga. But through her incredible perseverance, the help of her family and volunteers, the supervision of Ben Williams, and by the never-failing grace of God, Shequita Carter had a home!

Just a few days before the completion of the process, CAFCH held a homeowner application informational meeting, which Shequita was forced to miss because of job responsibilities. But she sent a message to the gathered hopefuls which she has agreed to have included in this article.

“Good morning everyone. Even though I am not here physically I am here in spirit. My journey with Clarksdale Fuller Center for Housing started approximately two years ago. I was the mother three small children, with 2 that can even walk yet. I heard about an event taking place at Kings Temple Fellowship Hall in the same seats that you guys are sitting in today. I thought that this was a great opportunity to gain a better house for my children. But I didn’t know that they will be such a blessing in my life…. When I received a call from Bill stating that I had been chosen to become one of the projected home buyers, I was overjoyed. I knew that this was a once-in-a-lifetime chance for me and my children. And when the process for us to gain sweat equity hours started, me and my family were on board. We worked for approximately one month and then boom COVID-19 happened. I knew that this was an unforeseen life changing situation and it would bring the process for everyone to a stop. With patience I continued to do everything that was asked of me in this process because I knew that this will be a gift from God. I have gained a new family from the Fuller Center for Housing house. Bill, Bunky, Mrs. Bobbie, and Ben have been so supportive throughout this whole process for me and my family. They have answered any questions that I may have and if there was anything I didn’t know, they would make it their business to get the answers for me. Now after completing all the requirements, I am now the home buyer of a Fuller Center home! My children and I now have a safe living environment where they can play outside without being hurt and they have enough living space. I am beyond thankful for all of these people who made this process possible for me and my children. Thank you.” 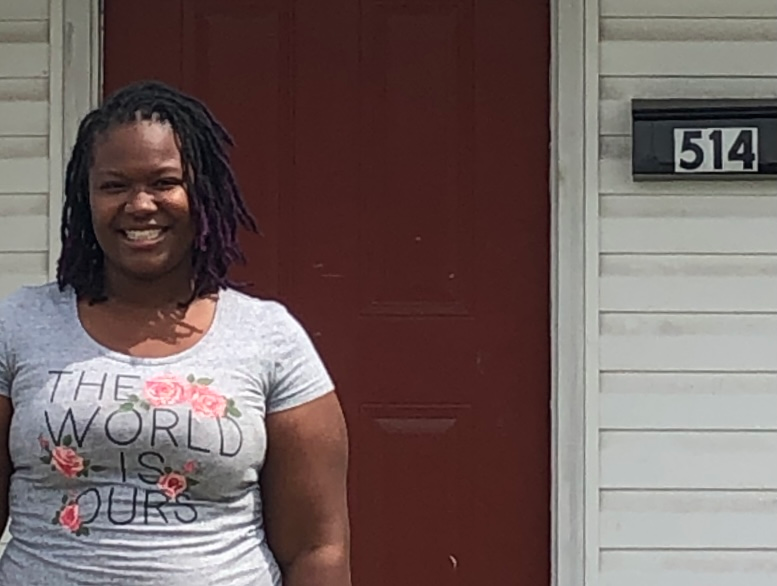 
« A "FULLER" EXPERIENCE—BACK TO WORK AT LAST!
Archive
90 CHOCTAW AND HOLY FAMILIES: GOD DOES INDEED WORK IN MYSTERIOUS WAYS »
