Last month, USA Today named Clarksdale the “4th Best Little Historical Town” in the United States. Begging the question of just exactly how USA Today has the authority to make such judgments and to bestow such titles (and still believing that Clarksdale deserved the award of “BEST Little Historical Town” in the US), we have decided to go with the USA Today flow and offer some evidence as to why (besides its obvious and rightly-celebrated ties to the blues and gospel music) one might consider Clarksdale’s history worthy of note. And part of that important story comes directly from the accomplishments of Habitat for Humanity’s Coahoma County affiliates. Of course, at the top of the list for many would be the Delta’s impressive music heritage, with Clarksdale featuring itself accurately as the home of the blues and gospel music. But equally significantly, though much less well known, are the roles Clarkdale and Coahoma County have played in the history of civil rights, social justice, and racial reconciliation in the Delta.

This week (June 22-26), CAHFH has the pleasure of hosting the first of three groups from St. Francis Xavier Catholic Church in LaGrange IL. The parish, as has been noted in an earlier post by Chris O’Hea, has been sending groups to the Delta for over 20 years. This year’s first group is led by veterans Pete Mulcahey and Ron Bandyk, with the bulk of the group being young folks, many of whom have served Habitat in Clarksdale throughout their adolescent and young adult lives. To respond to their interest in Delta Habitat history and to honor them and their church’s longstanding commitment to the social justice work here in the Delta, these next two posts are dedicated. Thank you and bless you, SFX! 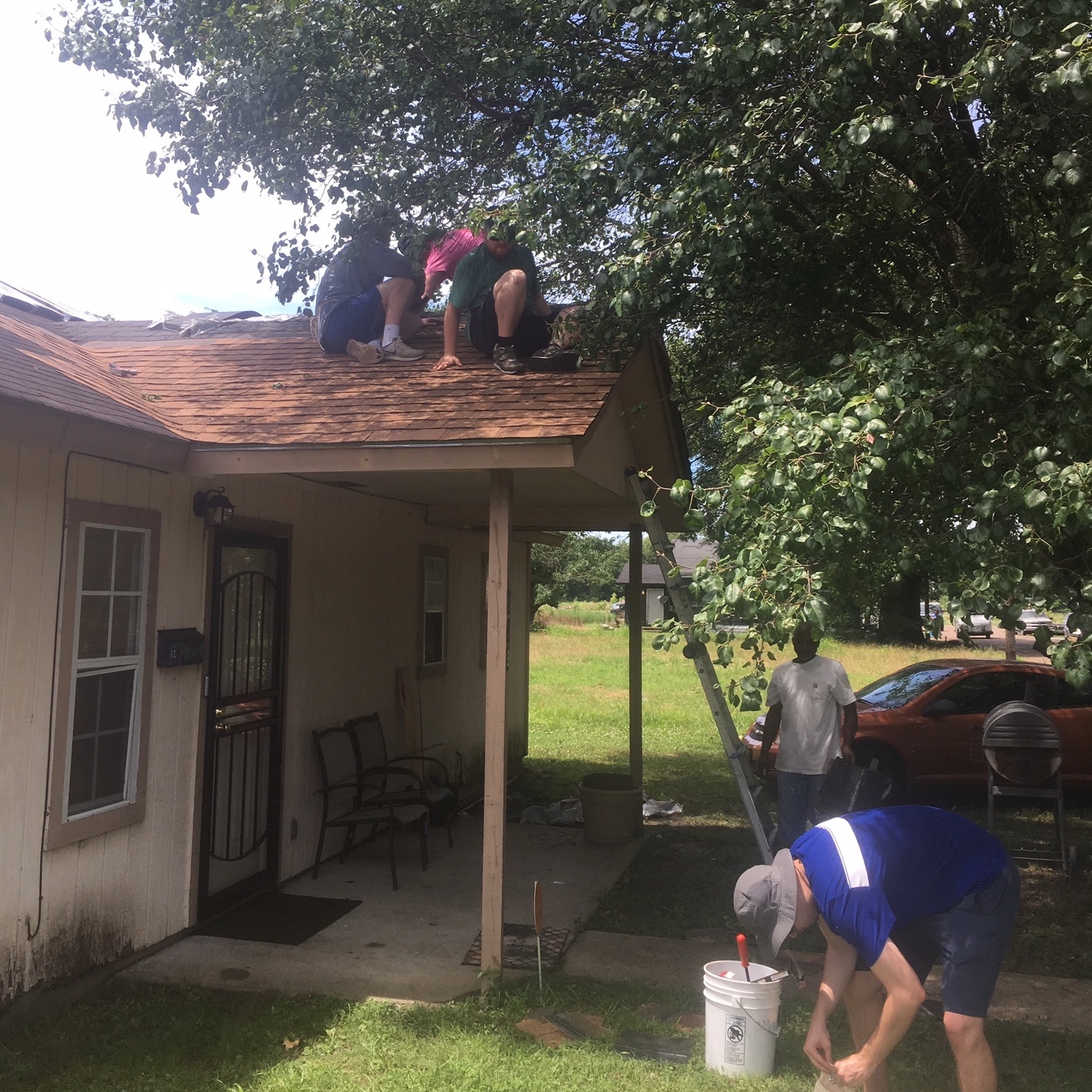 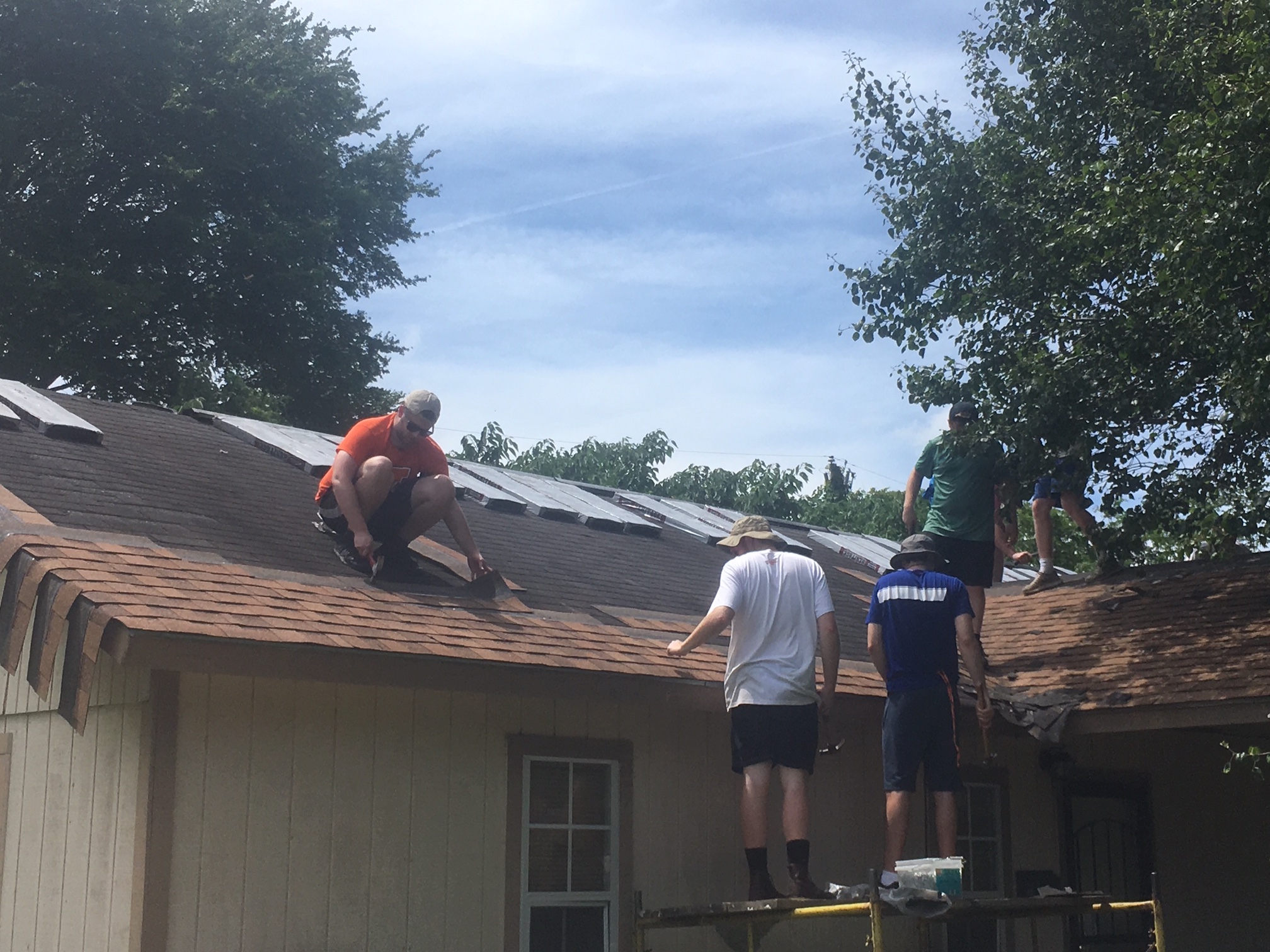 As previous posts have noted, for over thirty years, Habitat for Humanity has worked in Coahoma County in the famed Mississippi Delta, as a program to unite local people and outside volunteers in partnership to address the issues of substandard housing. As a Christian organization explicitly dedicated to an ecumenical vision embracing all people of good will and shared values, it has worked diligently to not only provide decent, affordable homes but also to create an environment of reconciliation and affirmation that has attracted literally hundreds of people from every background imaginable. Though the fertile fields of the Delta have produced tremendous wealth over the centuries through cotton production, it is now equally well-known for its serious poverty, with then-President Bill Clinton famously visiting Clarksdale as one of five stops on his Poverty Tour of the nation in 1999. At their best, the Habitat affiliates of Coahoma County (Clarksdale, Farrell-Sherard, Coahoma, and Jonestown) have provided homes and hope to the historically downtrodden desperate for both and a sense of meaningfulness and purpose to privileged people also hungry for inspiring options. By no means does Habitat eliminate poverty and the dysfunctional issues surrounding it, but it does provide an opportunity for people from all walks of life to participate in addressing some of the social ills that continue to beset the area and the country.

By now, most Americans are aware of and recognize Habitat’s efforts. What most people don’t necessarily recognize, however, is how central to the vision and impact of the larger Habitat organization that Coahoma County has been and continues to be. Back in the mid-1980s, Habitat visionaries in the Delta recognized local limitations in their hope to bring about the desired changes in housing availability. In short, there just weren’t enough people nor financial resources in this largely rural, underpopulated and underserved region to provide the kind of money and peoplepower necessary for sustained building, despite the heroic efforts of those early advocates. So, they came up with a unique solution to both problems—they conceived of a program that would bring college-age volunteers to the Delta over their Spring Break weeks, to work alongside potential Habitat homeowners and organizers and to have the volunteers bring with them the funds necessary for the construction materials. The program actually started in the little town of Coahoma and proved immediately successful, though, of course, on a small scale at first. Students from all over the United States came to Coahoma where they were greeted and housed by local leader Mayor Washington Jones and his staff of dedicated newcomers to the area like Joe Carton, Karen Kennedy, and Ray Hunt. The wildly successful experiment at Coahoma resulted in the building of dozens of Habitat homes in the little community of 300 and the program became known as Collegiate Challenge. According to the official Habitat website, the little experiment that started and found success in Coahoma has now sent over 300,000 college students to various Habitat worksites throughout the United States and the world and has become a mainstay of the entire Habitat program. And it established its successful track record right here in Coahoma County!

As local folks began to notice the success of Collegiate Challenge and Habitat in Coahoma, they wondered why it couldn’t be expanded to other nearby towns. Building, led by local folks like Butch East and Otto Preus, had already begun in places like nearby Tutwiler and Clarksdale, but other equally appropriate areas remained untouched. One of those areas was Farrell on the west side of Coahoma County, and some of Farrell’s residents, like Dorothy Jenkins and Ida White, began to wonder why the little revolution that was happening in Coahoma couldn’t be replicated there. As a result, with the help of the Coahoma leadership and willing contributions from Collegiate Challenge volunteers and other outside groups, building began in Farrell. The only problem was that the actual Habitat for Humanity by-laws had set up requirements for affiliate status, and Farrell met none of them (except, of course, for the need), so a hapless Habitat official was dispatched to tell the people in Farrell to cease and desist. The local folks were, of course, deeply disappointed by this turn of events but proceeded to grace the official with a warmly welcoming community potluck, by the end of which the official had been won over. When he left, he promised them that he would do his best to persuade Habitat officials to bend the rules a bit.

The result was a merging of Farrell with the nearby hamlet of Sherard to create the Farrell-Sherard affiliate, and, with generous grants of land from local planters like Dan Crumpton and Jack Sherard, building began. In the very beginning, much of the early work, including the transformation of the newly donated Sherard Methodist Church into a dorm for Habitat volunteers, was carried out by groups of outside volunteers like the Buckeye Builders (OH), the Kairos Carpenters (IN), and loyal partners from IL and MN, but soon, Collegiate Challenge groups joined the fun. As a result, the little F-S affiliate, despite its incredibly small size, was able to build a house a year throughout the mid-1990s and into the new century. And, in 2001, this little affiliate from Coahoma County Mississippi was honored with Habitat’s Jimmy Carter Award for most houses built per capita in the United States, and board president Dorothy Jenkins was flown out to LA to receive the award at the annual organization-wide Habitat meeting! The next year, Farrell-Sherard won the award again, and then nearby Jonestown and soon thereafter, according to local lore, Habitat stopped giving out the award, as it became clear that these little Delta affiliates, through the contributions of local homeowners and landowners and the enthusiastic support of outside volunteers, would always win.

The significance of Habitat’s influence, in the establishment of Collegiate Challenge and the retirement of the Jimmy Carter Award, is not confined to home-building and has continued to the present. Young people initially brought to the Delta by Habitat have partnered with local leaders and supporters to create not one but two widely celebrated after-school programs here in Coahoma County: Spring Initiative and Griot Arts. Serving to fill in some of gaps prevalent in the underfunded Mississippi education system, Griot has created job opportunities at their Meraki coffee shop in Clarksdale while Spring has succeeded in turning out a number of first-generation college students, and both groups have partnered with the renowned Quapaw Canoe Company to benefit their young people. In a non-profit world mostly funded by large grants and very wealthy benefactors, these programs have survived and thrived on the basis of smaller contributions from churches, civic organizations, local grants, and an impressively large number of individual donors. And, as long as they can manage to continue to raise the proper support, they show no signs of slowing down anytime soon.

These notable accomplishments are just the tip of the iceberg in terms of the impact that Habitat for Humanity and their related programs in Coahoma County have had on the lives of literally hundreds of people, both here and all over the world. Individual stories of personal growth and healing, discovery of meaningful purpose in life, and deliverance from some of the nastier cycles of poverty that continue to bedevil the region abound in this remarkable history. At the same time, it is clear that there is still plenty of work left to do and plenty of more good stories waiting to be created. The needs of the local affiliates in Coahoma County remain pressing. But the narrative is one of tremendous accomplishment and it is a narrative that needs to be told and embraced as inspiration, as we all move forward together.


« ONLY YOU CAN PREVENT...
Archive
COAHOMA COUNTY HISTORY AND JOHN MILTON BROWN »
