On February 20, 2022, Uni High returned to the Delta after a one-year COVID-enforced hiatus, and CAFCH welcomed them with closed arms, ever-present masks, and a serious commitment to social distancing—but we were still overjoyed to have them return! Because of ongoing health concerns and a desire to avoid overcrowding without reducing the number of volunteers, the group split itself into two, with one crew staying in the Clarksdale dorm as usual and the other heading south 17 miles to Tutwiler, to work with our sister affiliate, West Tallahatchie Habitat for Humanity. And work they did!

The Tutwiler work, overseen by ace construction guru, JD Smith, consisted of preparing a lot for its slab and then having that slab poured—a momentous moment in all new home processes. Enjoying balmy Delta weather after a long cold winter in IL, the volunteers covered themselves with glory (and just a little cement). Unfortunately, there weren’t quite enough work boots to go around so our JD clone, Ben Williams, ended up with a bunch of it on his sneaker-clad feet, which left him with some serious foot burns as he hobbled through the rest of the week. 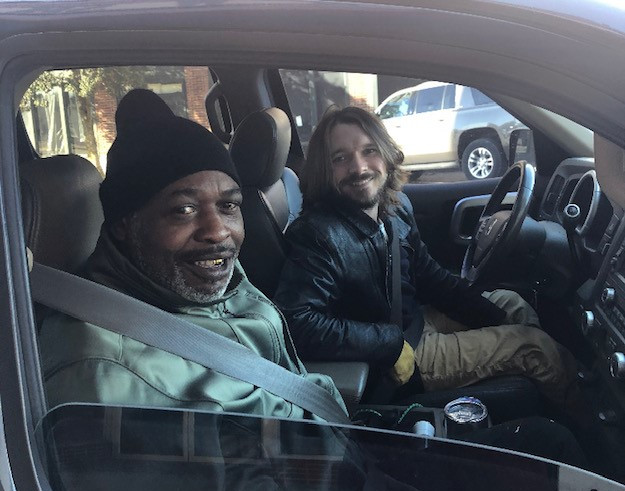 None of that stopped Ben, however, from overseeing some serious destruction at the old Paramount theater in downtown Clarksdale. A little background on that work. Because of the ongoing COVID slowdown and the exigencies of Delta winter weather, we had not made as much progress as the Tutwilerites, so we were still waiting on the slab prep for our 50th house and therefore had little work for volunteers. Such moments, though apparently unavoidable, are nevertheless quite anxiety-producing, and this time was no exception. In the gap, however, stepped Ben Lewis and our dear friends from Griot Arts, another of the splendid afterschool non-profits that Clarksdale is becoming known for. They, it turned out, had just been given an abandoned four-story former JC Penney building and a neighboring derelict site once the home of the famous Paramount Theater, a Clarksdale landmark. Griot was in the beginning stages of securing major grants for the renovation of both buildings, in order to transform it into an educational and performance space, the like of which hasn’t been seen in the Delta for some time. Pre-transformation, they needed demolition and clean-up—as it turns out, a lot of it—and the Uni kids were absolutely up to the task! Within the week (thanks to the generosity of local friend, David Holt), several trailer loads of scrap drywall, metal, wood, and accumulated dirt made its way to the local dump, and, once again, all benefited tremendously from the kind of allied effort for which CAFCH is becoming noted. 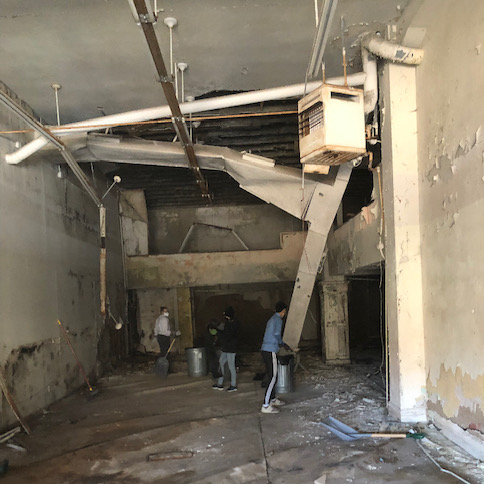 Being split into two groups, with little opportunity for group interaction on the jobsites was truly unfortunate for the Uni-ites, but we were able to make up for it by having our nightly group discussions (and birthday celebrations) at Griot’s Meraki Coffee Shop, thereby highlighting again the symbiotic relationships developing among the Clarksdale non-profits. The groups were also united by joining in one of the legendary potlucks put on by local Habitat homeowners in Tutwiler. Here, we got to see firsthand again the generosity of the local community, as they fed us to overflowing. We were also blessed with visits that night from Clarksdale pastor JJ Jackson, always a crowd favorite, and JoAnn Blue, a recent addition to the Clarksdale Fuller contingent, about whom we will be hearing more soon. 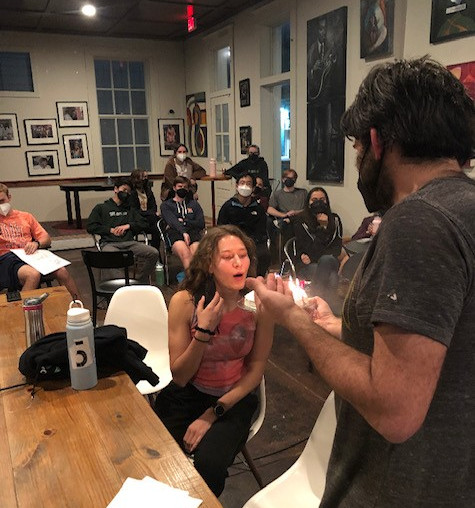 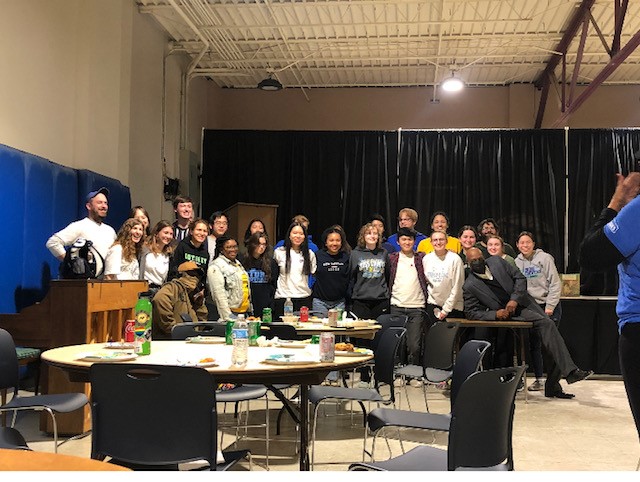 As always, the trip had a profound impact on the students and three of them were willing to share their testimonials with CAFCH, for inclusion in this news story. Ryland Graham wrote:

I was really excited that the Sprabitat [ed. note—this is the Uni fund-raising club that supports both the Fuller Center and Spring Initiative] trip to Clarksdale was back after COVID but I honestly did not know what to expect from it. I thought we might go down there and build a house and that’s it. However, what I got was an enriching education of the local history and communities, bonding with classmates, and an opportunity for personal reflection (plus building a house). I am really grateful to the Fuller Center, Mr. Leff, and everyone involved in the trip for the opportunity to expand my own horizons and inspiring me to pursue more service opportunities in the future. It was a lot of fun and I don’t think I will ever forget that week.

We certainly hope not!

Sally Ma contributed her energy and cheerfulness to the demotion work in Clarksdale and she took advantage of the proximity of some of the local attractions to delve into the dynamics of blues culture, so central to the Delta experience:

Leading up to the trip, we’d always hear about the Blues and their ‘profound amazingness,’ but of course, I didn’t fully understand what that meant. It was finally when we decided to take a walk around Meraki that we spontaneously stumbled upon the Clarksdale Blues Museum on 1 Blues Alley (such a cute and fitting address), after seeing splatters of music-related artwork along the way, including an entire Blues-theme painted car parked on the road. From the outside, the museum just looked like a spunky little building next to the railroad tracks, so we were given only a few minutes to explore inside. However, we were all deceived.

Upon entering the exhibit, we realized, this museum is huge, with such a comprehensive history of the Blues, musical artifacts from artists, and several rooms to explore it all. Begging for more time in the museum, I finally realized the immense impact of music on the Clarksdale community. Knowing there weren’t many physical locations for the community to gather previously, especially after seeing the old Paramount Theatre that they were renovating to become a new space, I understood that sharing music had stood as a placeholder instead. And later, driving through Clarksdale, this was further confirmed as I saw multiple musical art murals, heard live music from restaurants, and spotted billboards advertising upcoming music festivals, among other things. It was truly an “aha!” moment for me, and looking back, my heart thumps to a new beat just thinking about Clarksdale’s profound, historical love for music.

Madeleine Keenan spent most of her week in Tutwiler, and her reflections were particularly poignant and instructive:

Our trip to Clarksdale was impactful in many ways, both for us and, we hope, for the communities we worked in. We arrived in Clarksdale knowing very little about what to expect but excited to meet the people who we’d be working with. Throughout the week we worked on a house in Tutwiler and met individuals from the community who told us about their experiences living and working in the Delta. I liked meeting people who lived in the area. Everyone was friendly, totally welcoming, and willing to help us with anything we needed.

At our worksite in Tutwiler we made a much progress on the house as we could, insulating, installing siding, and finishing up the outside of the house. Most of us didn’t have any building experience but we were able to contribute to the group. We ended each day with a sense of accomplishment because of the work that we had done. Spending an extended period of time working for an important cause and seeing firsthand the people we were helping was particularly exciting.

My experience in Clarksdale was special, not only because of the service that we did but we were able to bear witness to the racism and remnants of slavery in the Delta. As someone whose ancestors were enslaved this was particularly emotional for me. For my family, owning land addressed the wounds of being stolen and owned as property. A place to live that wasn’t dependent on anyone offers a sort of freedom that my family and many others have sought. I was honored to participate in this important step for others.

And CAFCH was honored to have all these remarkable students willing to participate in the restorative work being done here in Clarksdale.


« BOB PACK, SFX, AND THE STAIRWAY TO HEAVEN
Archive
THE RETURN OF ST. MICHAEL'S AND ANOTHER FULLER BLESSING »
